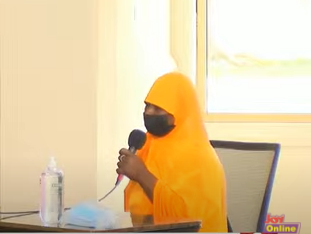 A resident of Ejura, Sadia Fuseini, has alleged that she witnessed Baba Iddi, a brother of slain activist, Ibrahim Mohammed aka Kaaka drag him into the bathroom after he was assaulted on June 26.

Mrs. Sadia Fuseini, who appeared before the three-member committee probing the death of two protestors in Ejura, on Tuesday, stated that she heard a disturbing sound, one she believed was from Kaaka, who had just arrived at the house on his motorcycle.

But upon arrival at the scene, she saw the activist being dragged into the bathroom by his brother.

“I was performing ablution to offer my prayers. I heard the sound of Kaaka’s motorbike, coming towards the house. Suddenly, I heard a sound ‘paam’. I thought that it was the motorbike that had fallen. So my Lord, I stopped whatever I was doing and relaxed to observe whatever follows.

“Suddenly, I heard someone groaning. I came out to see what exactly it was. I saw Kaaka’s brother holding his hand and dragging him towards the bathroom which was lighted but suddenly, the light went off,” a translator told the Committee on her behalf.

After observing this, the witness told the Committee that she rushed to draw the attention of Kaaka’s wife, Sahada Humu.

But before Sahada got out of her room, she turned and saw that Baba Iddi had left his brother and was going out.

“I have a friend who is also a neighbor, and when she heard me shouting and knocking at Sahada’s door, she came out and met Baba Iddi on the road,” Mrs Fuseini added.

Later, Sahada together with Kaaka’s mother and brother (not Baba Iddi) went to the said bathroom and found the activist lying on the ground.

“I knocked at her door shouting ‘Sahada, wake up. Come and see something.’ Kaaka’s mother also heard the noise and came out of her room. Kaaka also had another brother in the house, they all came out. The wife brought a torchlight and I asked her to take it towards the bathroom. She then saw her husband’s body lying there. He was then taken to the hospital,” she told the committee.

“Because Baba Iddi is the brother of Kaaka, I was afraid to mention this to anybody. So that was why I was reluctant. I was just praying that Kaaka would recover and then tell the story himself that it was his brother who caused that harm to him.

“Sadly, Kaaka did not recover so prior to that, I had called and informed my husband, narrating the whole incident to him. My husband then suggested that since Kaaka is no more, we have to let the cat out of the bag. So we went to the police station and reported the matter,” she stated.

Ibrahim Mohammed Kaaka was assaulted in front of his residence on June 26. He was hit on the head several times. The activist was then rushed to the Ejura Government Hospital.

Owing to his severe condition, Kaaka was transferred to the Komfo Anokye Hospital where he was pronounced dead on Monday, June 28.

Since the murder of Ibrahim Mohammed, three suspects have been picked up by the Ashanti Regional Police Command.

They include; Issakar Ibrahim, also known as Anyas, Fuseini Alhassan and brother of the deceased, Iddi Mohammed.

DISCLAIMER: The Views, Comments, Opinions, Contributions and Statements made by Readers and Contributors on this platform do not necessarily represent the views or policy of Multimedia Group Limited.
Tags:
Committee of Inquiry
Ejura
Ibrahim Mohammed Kaaka