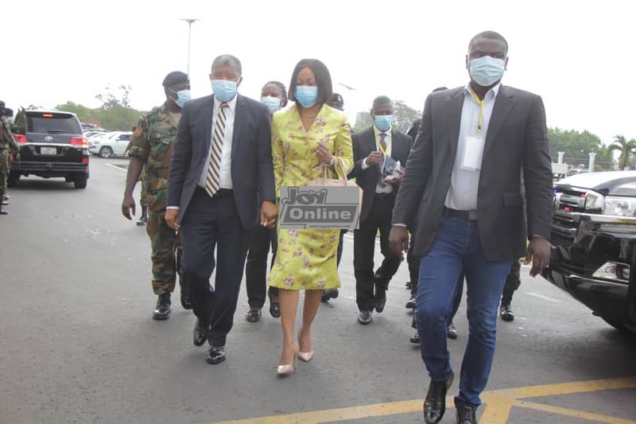 Former President John Dramani Mahama says steps taken by his legal counsel to hold the Electoral Commission Chairperson, Jean Mensa in the just-ended election petition trial were hindered because she was “protected”.

Speaking to the press on the Supreme Court’s decision to dismiss his election petition application, John Mahama said holding “Mrs Mensa accountable was blocked time again by a protective cordon and firewall,” an act he believes has confounded many Ghanaians.

“Worse still, she was aided by her counsel and the court to avoid explaining to the good people of Ghana from her own testimony, under oath in a properly constituted court of law, the errors she herself admits to have committed in the declaration of the 2020 Presidential election results,” he stated.

Comparing and contrasting the present Chair of the EC to her predecessor; Afari Gyan who willingly testified in the 2013 election petition, the former president indicated that the inaction of Mrs Mensa to testify in this election petition leaves a very bad precedence for the future.

He believes that this is a clear stab in the heart of transparency and accountability to the sovereign people of Ghana.

“Whatever the reasons for not allowing Mrs. Jean Mensa to testify or answer any questions, it leaves an embarrassing stain, not only on our justice delivery system but also, on the nation’s electoral system, which has deepened the grave doubts harboured by many Ghanaians about the true outcome of the December 2020 Presidential Election,” he added.

Mr Mahama consequently disagrees with the verdict by the Justices that “an election petition is akin to any other civil litigation” that further promotes “that an EC Chairperson can avoid accounting for her stewardship in an appropriate forum such as the Supreme Court.”

“Our legal team led by Mr Tsatsu Tsikata put together our case in a clear manner which left no one in doubt about the issues that were at stake.

“Apart from seeking to ensure compliance with the constitution, and for the true choice of the people of Ghana to be respected, the petition sought to provide opportunity for transparency and accountability in the management of our electoral process,” he added.

Mr Mahama is of the view that anyone who followed the proceedings at the Supreme Court with a fair mind will be astonished by the ruling declared by the Justices today.

The Justices of the Supreme Court on Thursday in a unanimous decision ruled that the election petition filed by former President John Mahama that sought to challenge the 2020 Presidential election results declared on December 9 by EC Chair Jean Mensa lacked merit, hence was dismissed.

“Much as I’m aware we are legally bound by the decision of the highest court of the land, the Supreme Court of Ghana, I disagree with the process of the trial and the ruling of the court,” he iterated.

DISCLAIMER: The Views, Comments, Opinions, Contributions and Statements made by Readers and Contributors on this platform do not necessarily represent the views or policy of Multimedia Group Limited.
Tags:
2020 election petition
Electoral Commission
Jean Mensa
John Mahama
Supreme Court