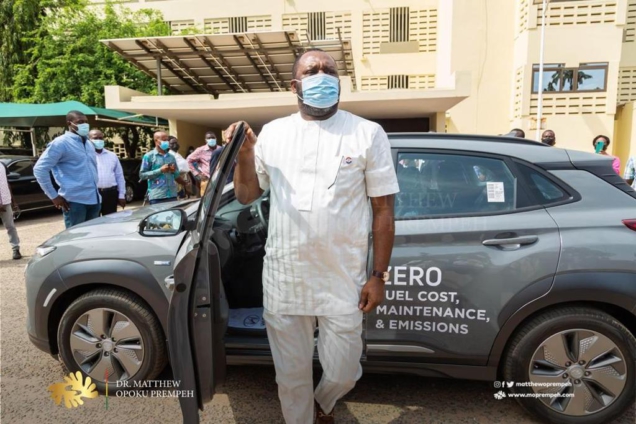 A comprehensive draft document on technical regulations and policy framework that tackles all technical issues on the mass deployment of electric vehicles in Ghana is expected to be ready by the end of this year.

The draft is being spearheaded by the Energy Commission in collaboration with relevant sectors such as Public Utilities Regulatory Commission (PURC).

While Energy Commission works on the technical regulations, PURC would come up with the tariffs.

Electricity consumption for charging the car and the rates to be paid is where PURC which is responsible for economic regulation would negotiate effective rate of charging.

Energy Minister, Dr Matthew Opoku Prempeh said when the draft is ready, it would be subjected to further scrutiny after which it would be submitted for cabinet approval.

He explained that the approved regulation and policies would outline the rollout plan for the country.

He announced that Ghana would adopt and adapt in the mass deployment to fit into the country’s system.

The Minister stated that the mass adoption would be done through the public transport system with more commercial electric vehicles.

The Energy Minister noted that mass deployment of electric vehicles is good for Ghana, but the resources needed for it is constrained by the country’s circumstances.

Though some Ghanaians are already using electric vehicles, the Minister is keen on sorting out the policy conundrum, adding the Ghana would use phased in approach.

He noted that the easiest way was to bring in the vehicles.

Dr. Opoku Prempeh explained that it was not just about bringing the cars, adding that, even ancillary systems and accessories around it must be specified.

This he said was to avoid a situation where different companies bring in different vehicles with different types of chargers, and if the charging systems do not communicate with each other would result in huge problems.

While the integration of small fleets of EVs into distribution grids does not cause any considerable impacts, their broad adoption could be really challenging for the adequacy and the secure operation of the electric system, as well as for the quality of power supply.

The generation and transmission system, could experience several problems related to grid loading, unpredictability of power flows, lack of installed and operational reserve, and changes in marginal generating units and, consequently, in energy prices.

In this regard, Dr Opoku Prempeh said before Ghana can undertake mass adoption of electric vehicles, the impact on the national grid has to be critically taken into consideration.

As a result, he said a study on the impact on the national grid would have to be conducted to determine the level of investment needed to make the national grid robust to support mass deployment of electric vehicles.

He stated that the Energy Ministry holds the key to mass deployment in the sense that it has to look at the impact of migrating from liquid based fuels to gas based fuels and advice government regarding how much generation should increase.

“When you move out of fossil fuels into clean cars, the most dependable power is one generated using gas,” he stated.