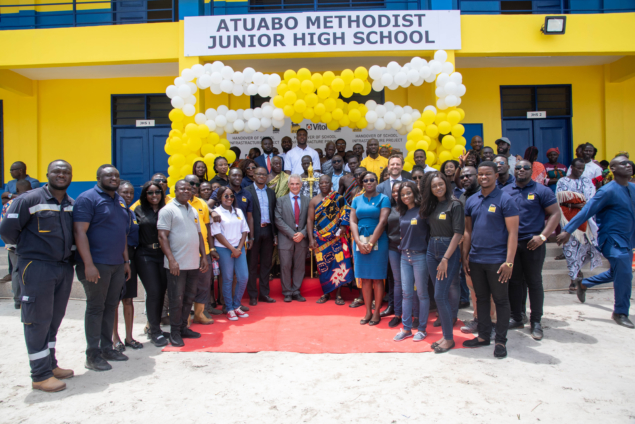 Eni Ghana and Partners have handed over school infrastructure project to Ellembelle District.

Eleven newly constructed and rehabilitated state-of-the-art school buildings with ancillary facilities, have been handed over to the people of Ellembelle by the OCTP Ghana Partners, led by Eni Ghana Exploration and Production Limited.

The project, which took 16 months to complete, forms part of the OCTP’s commitment to giving back to the community and improving the lifestyle of people in their host district, Ellembelle of the Western Region of Ghana.

The handing over ceremony saw massive participation from the respective communities, with each school comprising fully furnished basic and junior high blocks, canteens, staff common rooms, libraries, toilet facilities and AstroTurf parks. The schools will also enjoy uninterrupted power supply as they are fitted with solar panels, in addition to independent water supply and improved sanitation, all in the bid to promote sustainability.

Managing Director of Eni Ghana, Valenti Giuseppe, addressing the chiefs and people of the Eastern Nzema Traditional Council at the handing over of the school infrastructure project, described the event as an all-important one as 16 months of hard work and support from stakeholders had yielded improved teaching and learning environments for beneficiary schools without any damage or harm.

“Good infrastructure improves school attendance and staff motivation. After teaching in these new classroom blocks, teachers will also get to rest in staff rooms. The canteens will be great places for eating hot meals and the AstroTurf will be good for extracurricular and sporting activities. The provision of an independent source of water and sanitation will improve the general well-being of students with the buildings also being child and disability friendly,” he posited.

Valenti Giuseppe applauded the OCTP Partners, World Bank and the Chiefs and people of beneficiary communities for their contribution in ensuring that the buildings are in line with their needs while charging them to put the infrastructure to good use and well maintained.

The Western Regional Minister, Kwabena Okyere Darko-Mensah expressed gratitude to Eni Ghana and the OCTP Partners for investing in Ghana and the region in particular through their Corporate Social Responsibility (CSR) activities. He charged Eni Ghana and its partners to invest similarly in other parts of the region. “We want Eni, GNPC and Vitol to also invest in other parts of the region, prioritizing and tailoring infrastructure to meet the needs of these communities.”

The Regional Minister further pledged unflinching support towards companies seeking to establish themselves in the area to achieve maximum productivity to support the communities they operate in.

Awulae Amihere Kpanyinli III, Paramount Chief of the Eastern Nzema Traditional Council described Eni and its OCTP partners as the best among the lot to have operated in the area.

“Eni and its OCTP partners have built and renovated school buildings in our communities and that is something we cannot comprehend. We have seen other companies run operations from here but have never enjoyed the development given us by Eni and partners and as such, we are very thankful for that.”

As a sign of gratitude, the people of Nzema East Traditional Council gifted Eni Ghana and its OCTP partners with a fattened ram and drinks.

DISCLAIMER: The Views, Comments, Opinions, Contributions and Statements made by Readers and Contributors on this platform do not necessarily represent the views or policy of Multimedia Group Limited.
Tags:
Ellembelle District
Eni Ghana and Partners
OCTP school infrastructure project