Emma Ankrah: My encounter with an ‘Aboki’ 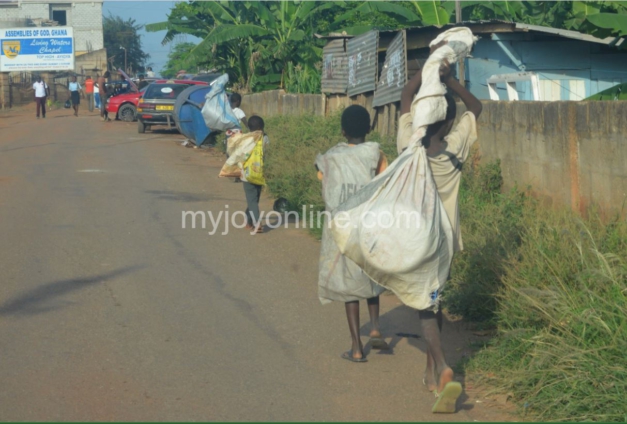 Relocation happens at a point in one’s life. We relocate for various reasons; to get close to a workplace, family reasons (familial matters), missionary work, to cohabitate with a lover. Mine is due to marriage.

I arrived at my new destination with hopes of having my peace and being the ‘madam’ of the house. The dream was not shattered in any way, but it came along with a little string – the new location’s ‘original property owners’.

Not owners in the sense of landlords, but owners in the literal sense that they pick up everything they find on an individual’s property they believe would be useful to them and continue on their journey.

Many of you have probably seen them unless you live in residential areas like the ‘Legons’ and ‘Airports’ etc. These ‘original property owners’ are mostly men who parade through the streets and settlements wearing soiled clothes and carry a sack on their backs, others also move with a one-wheel truck.

Am I getting your attention? … yeah exactly what came to mind -“Aboki” as they are called in my neighbourhood.

My place of abode is not a gated community or an estate nor is it fenced to restrict entry or exit. So imagine the ‘hais’ and ‘shoos’ I would have to do to chase away goats and sheep or fowls. That is even a little of my worries.

The main issue for me is ‘aboki’ property owners’ who walk majestically to an individual’s compound to make their picks in the same way that the upper class and bourgeoisie would enter a place with their head lifted, chin up, and the royal walk to get noticed to shop at a high class supermarket.

Anyways, back to my concerns. I was one day indoors trying to take a nap after a long day. Sleep didn’t seem to take over, so I resorted to watching a movie – Hannah. While I was engrossed in the movie, I heard a strange noise. I was hesitant to trace the noise although I could guess the source. I later paused the movie to give it my full attention as the noise intensified. To be safe, I got up and drew the curtain a bit in search of what or whoever did not want me to focus on the movie. Initially, I thought it was some of the animals I had to ‘shoo’ or ‘hai’ away.

Only for me to see an ‘Aboki’ picking my husband’s footwear. I was shocked to the core. .. I stood still, unable to say a word. While in my shock, the guy put the footwear into the sack and was leaving .. I actually don’t know where I gathered the courage to shout BOSS!

With my broken Twi, I shouted “Hey! Where are you going with my footwear?”

He didn’t budge, so I hurriedly opened the door to meet him outside. “Boss! I am talking to you. Bring the footwear,” I demanded.

Only for him to say “oh madam I thought it was spoilt.”

My furious self replied “How on earth would you think it is spoilt?  If that was the case, would you find it in the porch?”

He then opened his sack to drop the footwear.

A neighbour who saw what transpired later approached and told me “that is what they do here. Don’t leave your stuffs outside.” She then narrated what another neighbour had experienced.

According to her, a neighbour who had a barrel of water outside, woke up to see the water soaked on the ground with the barrel nowhere to be found.

But why should this be happening in the 21st Century? When did the ‘Aboki’ who walk around the streets looking for scraps changed into invading homes to make selections illegally?

But I don’t blame them. Probably, the hardship we are all facing is forcing them into this. However, they better not add my location to it. Stay away ‘Aboki’.

DISCLAIMER: The Views, Comments, Opinions, Contributions and Statements made by Readers and Contributors on this platform do not necessarily represent the views or policy of Multimedia Group Limited.
Tags:
Aboki