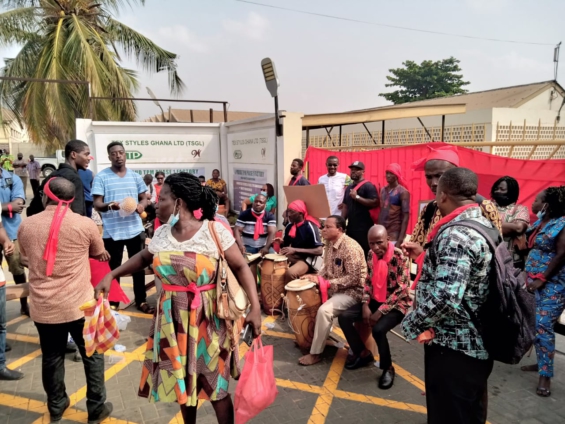 The emergency meeting has become necessary after an inconclusive meeting between ICU which represented the workers of GTP on one hand and management on the other hand, held on Thursday, 24th February, 2022.

The workers of the leading textile firm demonstrated at the premises of the company wearing red bands amid drumming and dancing, threatening to continue with a sit-down strike, until the current Managing Director, Fatoumata Doro, who joined the company about six months ago is sacked.

The disgruntled workers asked Parcom Capital, Dutch owners of the textile company to do the needful by sacking her.

General Secretary of the Junior Staff of Tex Styles Ghana Limited, John Ackon, told Joy Business that actions of the MD including unilaterally tampering with the workers Collective Bargaining Agreement are counterproductive and must be kicked out.

“She tampered with the collective bargaining agreement without going for negotiations. Despite attempts to draw her attention to the illegalities by the local union, she continued regardless,” he explained.

For the workers, their action is even more important for the future of the company as delayed decisions could make the company a pale shadow of itself, he pointed out.

Their inspiration for this agitation is drawn from the current state of textile companies such as Volta Star Textiles Ltd and ATL which were once vibrant institutions.

“Some years ago, workers of both Printex and ATL embarked on a nationwide demonstration to express our fear of how imported textiles could collapse the industry. Following this, government gave us zero rate VAT to help boost the industry. However the current MD is misusing the money to enrich herself and close associate,” Mr. Ackon pointed out.

The leadership of ICU later joined the demonstrating workers to offer solidarity and present the workers’ petition to management.

General Secretary, Morgan Ayawine reading out the petition said the company’s policies and the laws of the land frown upon Fatoumata’s actions and inactions.

These include reducing redundancy package from 12 weeks to six weeks, alleged tax evasion, disregard for laws of Ghana, among others.

The union agreed to the position of the workers that the Managing Director must be fired.

Asked if the workers’ strike would affect production, Mr. Ayawine said the action of the workers will rather save the future of the company.

After presenting the petition to management and locked up in a meeting for about two hours, both sides held their grounds and ended the meeting without reaching any conclusion.

The day ended without the workers damaging any property as they cooperated with the police from Community 8 under the Community 1 District Command.   Meanwhile, management of Tex Styles Ghana declined to speak with Joy Business over issues raised against the MD, Fatoumata Doro

DISCLAIMER: The Views, Comments, Opinions, Contributions and Statements made by Readers and Contributors on this platform do not necessarily represent the views or policy of Multimedia Group Limited.
Tags:
Employment and Labour Relations Minister
ICU
Ignatius Baffour-Awuah
Tex Styles Ghana Limited