#EndSARS: Having a leaderless protest is dangerous – Baako 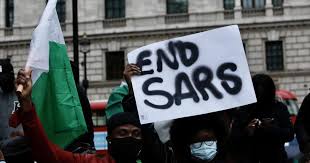 The Editor-In-Chief for the New Crusading Guide newspaper says Nigerians protesting against police brutalities, without any leadership is dangerous.

Abdul-Malik Kweku Baako explained that this is because negotiations with the Nigerian government becomes difficult if the protestors have no leader.

“If there’s a leadership and the leadership is deliberately hiding, it’s not good enough in terms of negotiations, dialoguing and getting concessions as it becomes difficult,” he said Saturday on JoyNews’ Newsfile show.

His comments come on the back of protests by Nigerians against ongoing brutalities from the Special Anti-Robbery Squad (SARS) taskforce.

Nigerians have taken to the streets to protest against the Special Anti-Robbery Squad taskforce (SARs), a Nigerian Police Force unit created to deal with crimes associated with robbery, motor vehicle theft, kidnapping, cattle rustling, and firearms in the country.

They are demanding an end to what they have described as ruthless brutalities from the taskforce.

They have called on International bodies especially, the Economic Community of West African States to intervene, but it appears the protestors have no leader. They say this is deliberate.

However, Mr Baako believes this is not healthy for the group if they really want to achieve positive results from the protests.

“The state actors begin to suspect that this is not a genuine movement; these are people who just want to create problems,” he said.

He further urged the Nigerian government to take immediate steps in addressing the matter before it further degenerates.

He said in spite of the protests, the government must realise that there is a problem that needs to be addressed.

“They must realise this protest has not come out of the vacuum,” he added.

DISCLAIMER: The Views, Comments, Opinions, Contributions and Statements made by Readers and Contributors on this platform do not necessarily represent the views or policy of Multimedia Group Limited.
Tags:
#EndSARS
Abdul Malik Kweku Baako
Nigeria