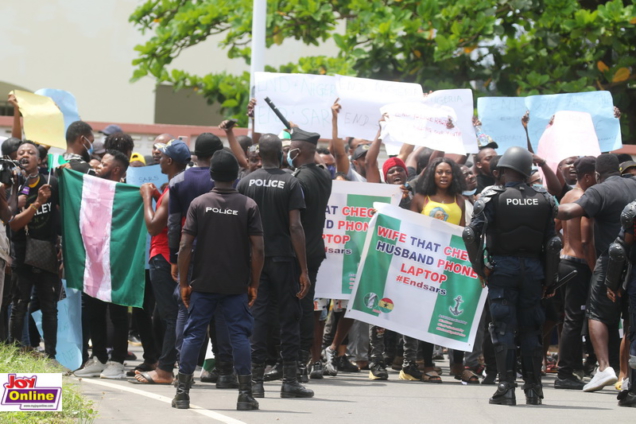 Hundreds of Nigerians in Ghana have assembled at the Nigerian High Commission to protest against ongoing police and military brutalities from the SARs taskforce in Nigeria.

The protestors are asking President Akufo-Addo, in his capacity as the ECOWAS chair, to call President Muhammed Buhari to order.

“How can you kill civilians protesting against brutalities, without arms? Is this democracy,” a protestor told JoyNews.

Nigerians took to the streets to protest with a hashtag #EndSARs following the ongoing brutalities.

Throughout the protests, many African youth have demanded their various leaders to, at least, state their position on the ongoing crisis in the region while accusing President Muhammadu Buhari and his leadership of complicity.

Mr Buhari is yet to publicly address the Nigerian citizens as the development continues to degenerate.

On Tuesday night, the Nigerian military opened fire on one of the pivot areas for the ongoing mammoth demonstrations, Lekki Toll Gate, injuring many unarmed civilians in the process.

This development has led Nigerian citizens to take a step further by calling for an intervention from the ECOWAS community.

They have asked President Akufo-Addo as the ECOWAS chair to intervene, with Nigerians protesting in Ghana demanding the withdrawal of the country from the Commission as a sanction and a wake up call to President Buhari.

“I have nine siblings in Nigeria, I am scared for their lives, that’s why I’m out here protesting,” another Protestor added.

Meanwhile, Lagos state Governor, Babajide Sanwo-Olu has denied being involved in the brutalities.

DISCLAIMER: The Views, Comments, Opinions, Contributions and Statements made by Readers and Contributors on this platform do not necessarily represent the views or policy of Multimedia Group Limited.
Tags:
#EndSARS
Nigeria
Nigerian High Commission Accra