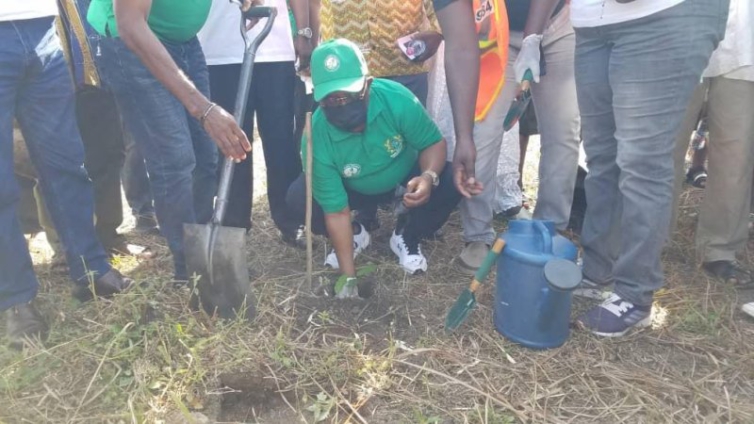 Volta Regional Minister, Dr Archibald Yao Letsa, has appealed to energy companies to work together with the Forestry Commission when felling or pruning trees to save power transmission lines.

The Regional Minister said stakeholders including the Environmental Protection Agency and the Forestry Commission has raised concerns over the felling of trees along streets in the Ho Municipality and added that the environmental value of trees must be considered.

Dr Letsa made the call when he launched a national tree planting exercise in the Region at the Sokode Abattoir.

He said the nation had earned a reputation for cutting more trees than it plants, and said the Green Ghana Project, an initiative of the President of the Republic, must be used to reverse the trend.

Dr Letsa said the nationwide initiative was “wonderful”, and commended the turnout of stakeholders including the President of the Volta Regional House of Chiefs, which he said testified to the “sure commitment” of chiefs, and the assurance of the custodians of the land.

Director of Operations, Forestry Services Division of the Forestry Commission, Madam, Edith Abruquah, said the nation must consider both tangible and intangible benefits of trees, as well as the decline of the Nation’s forest cover.

She said to the Ghana News Agency (GNA) that the exercise would be sustained year on year and that stakeholders would be gingered to plant the trees.

The Director said trees were planted for diverse purposes, and that it was necessary to consult with the Commission for the necessary support.

Present at the launch was the heads of the various agencies including security, environmental, health, disaster management, and local government, all who planted seedlings to mark the commencement of the exercise, which is expected to realise 5 million trees, 200,000 of which would be in the Volta Region.

A visiting delegation of Members of Parliament of Kenya, led by the High Commissioner to Ghana, Mr Eliphas Barine, who were in the Region, also took part in the exercise.

The Ghana News Agency observed massive mobilization across the Region towards the exercise, with the various District Assemblies and traditional areas leading the drive.

Dr Letsa said it was possible to realise over 500,000 trees in the Region, and called on the various schools to embrace the novel initiative, which must be sustained year-round.