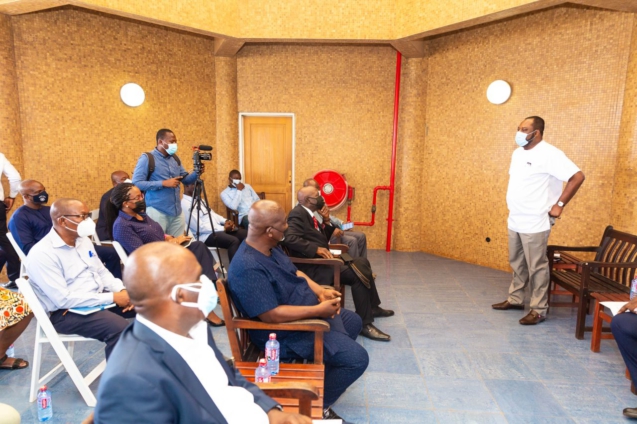 The Ministry of Energy has strongly refuted assertions made recently by the Institute of Energy Security (IES) that the Energy Minister, Dr. Matthew Opoku Prempeh, had failed to provide the necessary leadership in finding a strategic partner for the Tema Oil Refinery.

The assertions by the IES were contained in a petition to the President on the refinery.

A press release on Thursday, June 23rd, 2022, by the Ministry’s Communications and Public Affairs Unit sets out in chronological detail various events at TOR involving the Minister.

It said on 11th March 2021, four days after assuming office as Energy Minister, Dr. Prempeh undertook a working visit of TOR to familiarise himself with the situation on the ground.

In meetings with the IMC, Board, Management and worker unions, Dr. Prempeh has always indicated the President’s keen interest in the revitalization of the refinery, creating jobs and positioning itself as market leader on the African continent by seeking a strategic partner for the refinery.

Again, on June 15, 2021, Dr. Prempeh swore-in a three- member Interim Management Committee (IMC) whose terms of reference were to ensure the smooth transfer from the previous directors, undertake technical and human resource audits as well as receive and assess viable partnerships for TOR.

As part of its handing over notes, the IMC made recommendations to the incoming board regarding a strategic partner and sought the necessary approvals from the Public Procurement Authority (PPA).

In February and March 2022, a new Managing Director and board took office respectively, with a clear mandate to work towards securing a strategic partner for the revamping of the refinery.

The minister subsequently wrote to request an evaluation of all the processes involving interested parties and submit same for the attention of an inter-ministerial committee including the Ministry of Energy, Ministry of Finance, Ministry of Public Enterprise, State Interests and Governance Authority (SIGA) and TOR. This was to enable the committee make the necessary recommendations to the President.

On 20th May 2022, government granted approval to TOR to begin negotiations with a strategic partner.

Subsequent to this, on 10th June 2022, the Minister wrote to the Managing Director of TOR to provide guidelines and advice as the refinery prepares, together with its prospective transactional advisor, to enter into negotiations with a strategic partner.

Among others, he directed further that TOR’s indebtedness and workers’ pension funds must be included in the negotiations with the strategic partner.

In the said letter, the Minister emphasised that whatever agreement that may be reached between the refinery and the strategic partner is not final until it has been subjected to further scrutiny by the Ministry of Energy and the Office of the President.

The release stated further that it was clear the Minister has demonstrated ‘clear leadership, focus and vision’ in working towards the revamping of TOR, and further asserts that the claim by the IES ‘is borne either out of ignorance of these facts or a deliberate attempt to tarnish the Minister’s image’.

The Ministry further noted that given the weight likely to be accorded the IES’s comments, it was important for the organization to be circumspect in its public pronouncements and ensure fidelity to facts before going public.

‘The Ministry wishes to assure Ghanaians that Dr. Prempeh is resolutely committed to ensuring that TOR is put on a sound footing to support Ghana’s industrialization drive, and will continue to provide strategic leadership and direction in this regard’ the press release concluded.