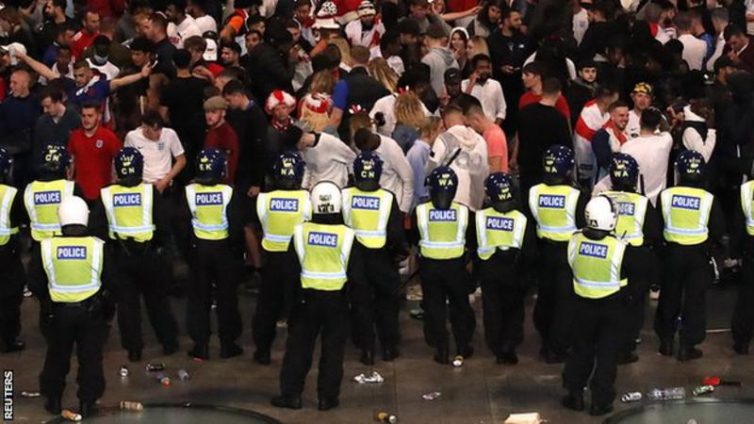 England have been ordered to play one match behind closed doors as a punishment for the unrest at Wembley Stadium during the Euro 2020 final.

Uefa also imposed a ban for a second game, which is suspended for two years.

The Football Association was fined 100,000 euros (£84,560) for “the lack of order and discipline inside and around the stadium” for the game.

“Although we are disappointed with the verdict, we acknowledge the outcome of this Uefa decision,” said the FA.

The ban is the first time the FA has received a punishment that has resulted in England having to play a home match behind closed doors.

Fans fought with stewards and police as they attempted to break into Wembley for the match on 11 July, which England lost to Italy on penalties.

Hundreds of fans got into Wembley for the showpiece without tickets after areas around the stadium became packed hours before the evening kick-off.

Many sat in the area reserved for players’ relatives, while England defender Harry Maguire later said that his father Alan suffered two suspected broken ribs before the game.

Manchester United central defender Maguire said his father was caught up in the stampede and was “struggling to breathe” after being trampled on.

The Metropolitan Police had said that 51 arrests were made connected to the final, with 26 of those made at Wembley.

“We condemn the terrible behaviour of the individuals who caused the disgraceful scenes in and around Wembley Stadium at the Euro 2020 final, and we deeply regret that some of them were able to enter the stadium,” added the FA.

“We are determined that this can never be repeated, so we have commissioned an independent review, led by Baroness Casey, to report on the circumstances involved.

“We continue to work with the relevant authorities in support of their efforts to take action against those responsible and hold them to account.”

The ban will be in place for England’s next home game in a Uefa competition, which will be in the Nations League next June.

Uefa said the fine related to “the lack of order and discipline inside and around the stadium, for the invasion of the field of play, for throwing of objects and for the disturbances during the national anthems” at the Euro 2020 final.

England fans booed the Italian anthem before the match.

Kevin Miles, the Football Supporters’ Association’s chief executive, told BBC Radio 5 Live he was “sickened” by what he saw at the final.

“On arrival at the stadium a couple of hours before kick-off, it was already pretty chaotic outside,” he said.

“I think there was a failure from early in the day from the policing outside the ground right through to the security arrangements on the perimeter of the ground, and then inside.

“We don’t have a bad track record of behaviour at Wembley and in that sense it was a bit of a one-off, but it’s a glaring one. It’s not acceptable.”

In July, the FA was fined more than £25,000 for crowd problems before and during the semi-final victory over Denmark, which included Kasper Schmeichel having a laser shone in his eyes as he prepared to face a penalty from Harry Kane.

Following Euro 2020, Hungary were ordered to play their next three home games – with the third game of the ban suspended – behind closed doors after Uefa found their supporters guilty of discriminatory behaviour during the tournament.

Hungary were also fined 100,000 euros but their supporters were allowed in for a World Cup qualifier against England on 2 September in Budapest as it fell under Fifa jurisdiction.

Following that game, football’s world governing body told Hungary’s FA to play two matches behind closed doors – one suspended for two years – and fined them £158,400 for the racism experienced by England players.