Enimil Ashon: I plead with NDC, give Ghanaians a break 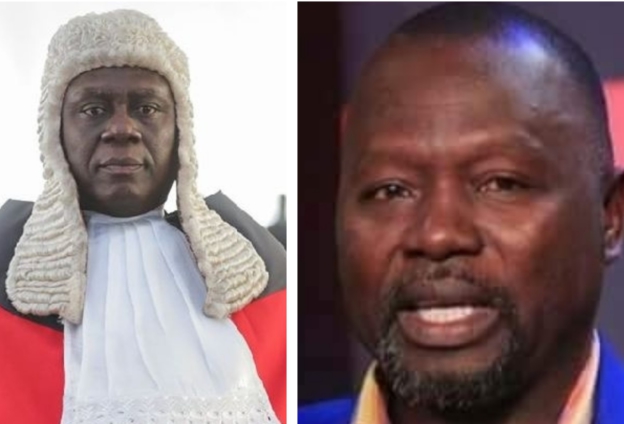 What is the Chief Justice aiming to achieve by complaining to the General Legal Council about post-judgment remarks made by Dr Dominic Ayine? To set the legal records straight? To seek to punish the former Deputy Attorney General and Law lecturer for poking a finger in the eyes of the seven (nine) Supreme Court justices who decided the outcome of the 2020 presidential election?

For practitioners of Law the exercise may be useful. One day some lawyer will cite the General Legal Council’s judgment in this matter as precedent.

Beyond these considerations, my opinion is that Ayine’s lecture should have been treated with silence. I question the quality of counsel being offered lately to people in authority. Why, for instance, should the NPP government seek, directly or indirectly, to scupper the street demonstrations by the #Fix Ghana Movement? It’s needless.

Having said this, the big question is: Was Dr Ayine right in condemning both the verdict and conduct of the Supreme Court justices in the election petition hearing? Was it unusual for all seven Justices to hold the same opinion on an issue?

The NDC had alleged that the EC inflated votes in favour of Akufo Addo in Ashanti; that the EC stuffed ballot boxes in the region. I ask if it is reasonable to make such an allegation and not be compelled to prove it with evidence, namely figures, pink sheets etc.

So how does anyone prove that the figures were correct? In court, Asiedu Nketia did not have any figures to prove that Akufo Addo did not obtain 50 per cent. One of the judges reminded him that as a political party, the NDC had assigned agents in all the 276 constituencies to collate figures. He then asked Asiedu Nketia three questions.

One, “From the reports of all these agents, what figure did Akufo Addo obtain?” Just in case the NDC agents failed to submit the figures to the party, the judge asked Asiedu Nketia a second question. “From your own calculations, what were the valid votes cast in favour of the petitioner (Mahama)?” The third question was, “What figures, from your own calculations, did the second respondent (Akufo Addo) get as the total valid votes cast in his favour?”

To all three questions, the NDC General Secretary replied, “My lord, I haven’t brought that figure to court”.

Answer me, dear reader, especially if you are NDC. How else, in the fairest and most democratic court in the world, do people prove allegations, especially ones involving figures? In court, Asiedu Nketia was given a calculator. Unless the court’s calculator was faulty, his own calculation showed that Akufo Addo won 51.59% of the vote.

Up to this date, NDC supporters have been made to believe that the EC chair or someone acting on her behalf, manipulated figures to put Akufo Addo out in front. Outside the court and to the media, the NDC had alleged that there was massive vote padding and other errors.

In court, all NDC brought were a few samples.

A gentle reminder, dear reader, especially NDC supporters. Forty eight hours after EC declared the results, the chorus from party was that Mahama had won. In the first television press conference after the election, the accusation was that the election was being stolen from Mahama who, according to the party, had won but was being cheated out of his victory. Another story was that the NDC as a party had won the majority in Parliament but that the EC was trying to prevent Haruna Iddrisu from taking his seat as Majority Leader.

In court, Mahama’s story was different. His petition was now that actually no one won but that Akufo Addo also didn’t get enough votes to be declared winner.

What NDC should be doing is rather to apologize to the hundreds of supporters, some who got  wounded and others who were maimed just because they had believed emotional outbursts not backed by facts.

This article is written because I think it is not fair that without any proof, and just for political advantage, the NDC has painted judges of the Supreme Court as people who cannot be trusted to be fair.

It amounts to holding Ghanaians to ransom for any group to threaten mayhem and violent street demonstrations just because it has numbers (4 million). That is ungovernableness.

Long before the election itself, Mahama had sought to prove his allegation that “the incompetence of this EC is legendary.” On September 22, he announced that “I am cutting short my tour of the Bono Region to return to Accra because of the increasing reports of challenges with the voter register and the exhibition process. We’ll address a major press conference on the issues in due course”.

He rushed to Accra but he saw no challenges. He forgot to call a press conference to say so.

Instead of an apology, there is a new story about integrity of the judges.

What is all this in aid of?

Why is somebody interested in making Ghanaians think that the Supreme Court judges and the Chief Justice are a bunch of robots or a group with a partisan agenda? Has it never happened that a panel of judges has been unanimous on rulings? . .

My own verdict is that Ayine did not have a legal ax to grind. It was a political ax.