Enimil Ashon: What is $25m to a cockroach! 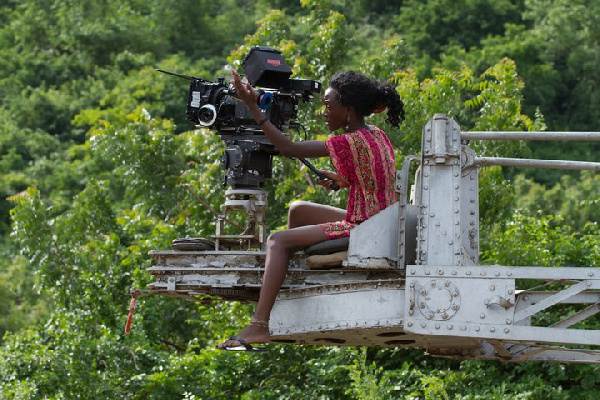 How did Nigeria succeed in becoming part of our thoughts, to the extent where Ghanaian film makers, consciously or subliminally, incorporate Nigerian aesthetics, Nigerian accents, Nigerian words and Nigerian gestures in Ghanaian films?

Why would the President of a West African country seeking re-election, consider his bid a foregone conclusion because he was seen by the electorate in pictures and on TV with a Nigerian film actress whom he had invited as a state guest?

This is the power of the cinema. Besides global influence, film is big money in Nigeria. That is why for Ghana, the industry cannot continue to be business as usual.

The business unusual took off with the Presidential Film Pitch Series last week. President Akufo-Addo was there to share his dream.

In daring to dream, the President and our National Film Authority are under no illusions. They know that Ghana is not Nigeria, in terms of population size, but they also know that patriotism plays no part in the equation. A film has to be good.

At this juncture, fellow Ghanaians, permit me to pause to pay tribute to the zeal that throbs in the bosom of our current crop of leadership. For lending the weight of his office behind the NFA’s search for investors, I say kudos to the President.

When the full story comes to be written, Akufo-Addo is not likely to forget his Tourism, Arts and Culture right hand man, Dr Ibrahim Awal. At the Movenpick Ambassador Pitch launch, the journalist turned Graphic MD turned businessman turned politician made his first ever public appearance since his appointment. And did he impress! Even the President smiled.

Insiders say that he is delivering. I am told that he (or his ministry) played no mean a role in NFA’s success in courting investors to commit US$25 million to film.

And now to the industry’s lady of the moment. As CEO of a fund-starved institution, Juliet is not beating the air; she is actually winning, and we can see the spent shells lying around for a witness.

Getting investors to commit US$25m for film is a masterstroke. The very thought of it spelled impossibility in one of the most under-funded sectors in Ghana since 1966.

As a manager, she seems to understand the one key word which, alone, opens doors: networking. In a field which has no shortage of big egos, it takes a certain pitch of persuasive tongue to get Linus Abraham, Ivan Quarshigah, Femi Odugbemi, Oludelu Sonekan to sacrifice precious creative hours and professionalism for a cause for which there is no promise of financial rewards.

Magic wands are scarce in the Ghana film industry. Ask Kwaw Ansah. His father-in-law collateralized his property to secure the SSB bank loan that financed the making of ‘Love Brewed’. It took a consortium of five banks to raise the capital for ‘Heritage Africa’ – with consequences that proved unpleasant. King Ampaw’s connections with Germany, in whose film schools he trained, were the collateral for financing of ‘Kukurantumi’ and ‘No Time to Die’.

That is why it is a stupendous feat for anybody to announce the closure of deals worth US$25 million for which five film entrepreneurs, out of 100, have been shortlisted to pitch.

After the kick-off, however, is what happens to the industry thereafter. I think the greatest challenge to the industry is the large quantities of film entrepreneurs who will shoot a movie in five days. No scripts. No research. Making the Ghana film industry more palatable for international audiences doesn’t seem to be their care. With attitudes like this, how can we attract the big bucks of the Netflix, MultiChoice, Canal Plus and StarTimes of this world?

Content is the word and until we can get our content right, we can forget it. Otherwise, we may as well present the US$25 million to cockroaches; they will chew it but will not receive any nourishment.

What I think I hear NFA saying, however, is that there is hope for the future; that the potential is there. Apart from that, Ghana still boasts a core of some of Africa’s film greats-behind-the-camera. Talk of Ivan, Kofi Asante, Shirley, John Passah, Danny Damah, Yaw Boakye, Amon Kwafo.

Last Wednesday, manna fell from heaven. For people in the industry, €45 million for NAFTI is exhilarating news.

You better believe it when the President describes NAFTI as the oldest film and television training school in Africa. Yours Truly was there from Day One, in 1978, not as a student but as a budding film critic with the ‘Ghanaian Times’ newspaper. To encourage me, the Institute’s authorities made me a member of Adjudicating Panels for the first three consecutive years of the annual NAFTI student awards.

I tell you, those were the good old days. Among the first batch were Nigerians, Zimbabweans, Kenyans. Fast forward, it remains a mystery how Nigeria raced past Ghana in terms of quality productions.

Listen to me, Ghana has had its days of glory. Potentially we still have what it takes to come all the way back to the front once again. Thank God for the President’s big money for NAFTI.

But why is that money quoted in euro?