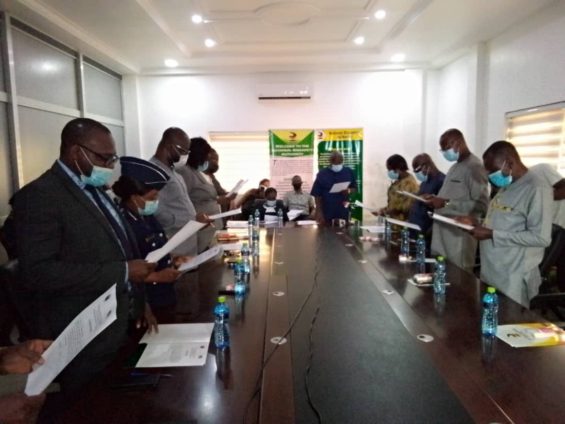 Minister for Environment, Science, and Technology Dr. Kwaku Afriyie has charged the National Biosafety Authority (NBA) to take Science-based decisions on GMOs for the country.

Speaking during the inauguration of the board of the NBA, the minister said although the issue of genetically modified organisms (GMOs) is a contentious one, it has to be settled.

“Look at the issue backed by Science and not by sentiments. Because in my office I know that (there are) GMO linked products which are waiting for go ahead for the next phase… You have to make sure that biological products are used for the benefit of the country,” he urged.

He told the board members that “It’s a very contentious issue. It raises its head and cools down. But it will never go away. Because as you know, we are using a lot of GM products in this country. In fact, it’s something that must be settled once and for all. So, your onus is to give education to Ghanaians”.

Prof. Charles Antwi Boasiako who is the re-nominated chair of the board said they will work in the interest of Ghanaians.

“The GMOs, this is what is going on in the whole world. We will ensure it benefits Ghanaians. We will not do anything that goes against the law,” he told the media in a subsequent interview.

Although scientists have completed the development of the GM cowpea variety also known as Bt cowpea, the absence of a governing board for the National Biosafety Authority (NBA) has stalled the approval processes.

Scientists at the state-run Savannah Agricultural Research Institute (SARI) of the Council for Scientific and Industrial Research (CSIR) in January this year submitted documents to the authority requesting for environmental release of the variety following 12 years of research.

But the authority asked the scientists to hold on and re-apply after it gets a new governing board, following the expiration of the mandate of the earlier one in January 2021. Now, the board is in place, clearing the way for a re-application and eventual decision.

“Now, with the board in place, they can submit. The board’s role is to ensure risk assessment is done, the various processes are followed, and a decision is taken on that,” Chief Executive Officer of the NBA Eric Okoree explained in an interview.

“We have heard about the campaign of some Ghanaian farmers for the release of the Bt cowpea which SARI has been working on. When the application gets into our hands, we will look at it transparently and objectively and seek public opinion in the decision.

The scientists at the Savannah Agricultural Research Institute have indicated they will soon re-apply for environmental release of the GM cowpea variety. It will take between 90 and 180 days before the authority returns with a decision after the request for approval is done.

“The intention is not to cause any genetic erosion. We will make sure that when we use this cowpea, still our traditional varieties will play hand in hand,” Prof. Boasiako stated.

What is GM cowpea?

Cowpea or beans is a popular, protein-rich staple crop that is usually cooked and eaten with other carbohydrate sources. It is considered the “poor man’s meat” and is popular in low-income homes that struggle to afford animal protein sources. The crop is however highly vulnerable to the deadly Maruca pod borer pests, which sometimes causes farmers to lose 80 to 100% of their cowpea grains.

To control the pest, farmers typically spray their fields with pesticides between eight and 12 times in the 12-week life cycle of the crop. But the genetically modified cowpea variety, into which a gene from a naturally occurring bacteria has been introduced, is resistant to the pest. Confined field trials have shown it reduces the need to spray fields with chemicals to only 2, and offers up to 5 times higher yields due to reduction in pest destruction.