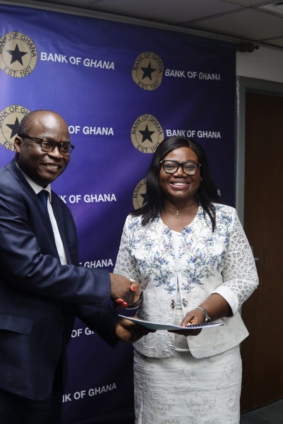 The Bank of Ghana (BoG) has advanced some ₵ 10 million to the Economic and Organised Crime Office (EOCO) to help complete Banking and Financial Sector investigations and prosecutions.

The facility is also expected to help strengthen the operations of EOCO to help BoG in the regulation and supervision of the Banking and Financial Sectors.

Speaking at a signing of the Memorandum of Understanding (MoU) to guide the disbursement, the Governor of the BoG noted that the support is very important because of how it will support the  EOCO in assisting the BoG with the needed investigations to aid the regulation of the banking and other financial sectors.

The MoU was signed by the Governor of BoG, Dr. Ernest Addison, on behalf of the central bank, and the Executive Director of EOCO, COP Maame Yaa Tiwaa Addo-Danquah initialed on behalf of her office.

The support will go a long way to assist the EOCO with the third Phase of the Banking Sector Clean up.

Details of the MOU

According to the BoG, the first tranche of ¢5 million is to be disbursed immediately to augment EOCO’s operations, especially with regards to investigations into the Banking and Financial sector clean up.

The rest is expected to be spread later to support other activities, aimed at helping with the regulation of the Banking and Financial Sector.

“The work done by EOCO on the financial sector clean-up, underscored the need for EOCO to be strengthened to improve upon fresh investigations,” Dr. Addison said.

The Governor maintained that the   ₵ 10 million will assist EOCO to conduct investigations that will help prosecute all the individuals whose action contributed to the collapse of some banks and savings and loans companies.

Dr. Addison announced that the EOCO investigations led to “issuance of 88 freezing orders to allow for full-scale investigations into activities of some banking officials”.

The Governor also appealed to the Attorney General to fast track work on the “dockets” submitted by the EOCO on banking officials that contributed to the collapse of the institutions.

The Governor said the complex nature of the malpractices required that a body of investigators like EOCO to help unravel the challenges.

Consequently, he said these cases required further investigations and to deal with it, some were referred to EOCO.

EOCO on  Bank of Ghana Support

The Executive Director of EOCO Tiwaa Addo-Danquah commended the central bank for the gesture and pledged to ensure that it was prudently used.

She said EOCO needed to be empowered to prevent the perpetration of economic and organised crimes.

She disclosed that, EOCO is working with the necessary authorities to crake down on tax defaulters since their investigations have shown that there are some serious  revenue leakages in some sectors of the economy.

Bank of Ghana on Research Chair at University of Ghana

In another event, the BoG and the University of Ghana have signed an MoU for the establishment of a BoG Chair in Finance and Economics at the University. This is to help promote research in these sectors in the country.

Speaking at the  Program the Governor of the Bank Of Ghana noted that the support has  become important, adding that “two of the lecturers are currently  serving on Monetary  Policy Committee”.

She said that the agreement is a boost to University of Ghana’s vision of becoming research-intensive, thereby contributing to Ghana’s development