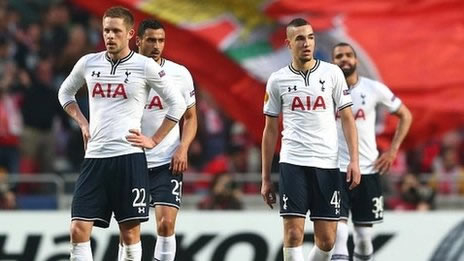 Tottenham exited the Europa League despite staging a second-half fightback against Benfica that put them close to taking the tie to extra time.

Ezequiel Garay headed in to put the hosts 4-1 up on aggregate.

But with the tie seemingly over, Nacer Chadli scored twice in a minute.

Spurs almost grabbed another as Gylfi Sigurdsson's injury-time header was saved, but Benfica made it 2-2 on the night and 5-3 overall when Lima scored from the penalty spot.

Having been outclassed in the first leg of the last-16 tie and looking weary in Lisbon, Tottenham's late surge almost inflicted Benfica's first defeat in 23 games in all competitions.

But Sandro's barge on Lima gifted the hosts a chance to level the scores and the Brazilian substitute sent Brad Friedel the wrong way with the last kick of the game.

Despite the aggregate defeat, Tottenham at least showed the character that boss Tim Sherwood desired prior to kick-off.

With late chances for Sigurdsson and substitute Harry Kane, who also had a penalty appeal turned down, Spurs could have taken victory but they will look back on their 3-1 first-leg defeat as the reason for their exit.

The fact they salvaged a draw with an injury-hit squad against last season's runners-up will be pleasing for Sherwood, who saw his team end a run of three successive defeats. 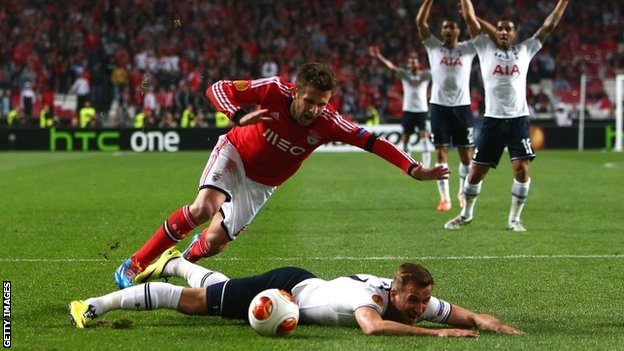 Spurs are fifth in the Premier League, on course to qualify for next season's Europa League, but it remains to be seen if Sherwood will be at White Hart Lane after the club was strongly linked with Louis van Gaal.

Sherwood has publicly criticised his players in recent weeks and he called for leadership from his side, who were without a recognised centre-back – midfielder Sandro and full-back Ezekiel Fryers deputising in the heart of the defence.

But they began slowly and, after Roberto Soldado scuffed a shot at the back post and then fired over from close range, Garay's first-half goal put a technically superior Benfica in control.

Sherwood decided to watch from the stands after his fall-out with Benfica manager Jorge Jesus in the first leg. He was still infuriated after his side wasted a good free-kick opportunity a minute before the opener, with captain Aaron Lennon making a feeble challenge on Eduardo Salvio, who chipped a cross to team-mate Garay.

In the first half, there were signs of promise from a young Spurs side on the counter attack and Andros Townsend shot wide in one decent opportunity after the break.

Then, with 12 minutes left, Chadli cut in from the right before firing a shot past Benfica keeper Jan Oblak.

A minute later, the Belgian winger pounced on Kane's header from Lennon's cross to put Spurs within reach of extra time.