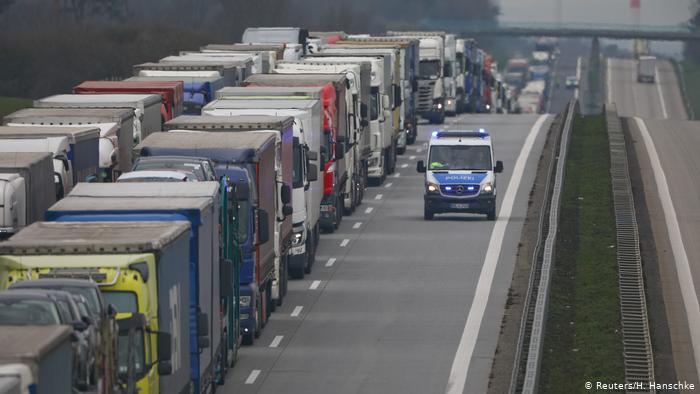 The European Court of Justice has ruled that Germany’s highway tolls for trucking firms are too high. Judges agreed that charges for traffic police should not be included in the bill.

The European Court of Justice (ECJ) on Wednesday ruled that Germany should not charge freight companies for the cost of traffic police on German roads.

According to the court, only infrastructure costs can be taken into account when setting tolls. These costs, it said, included charges for the operation, maintenance and expansion of the road network.

“Police activities, however, are the responsibility of state, which exercises sovereign powers and does not only act as the manager of the road infrastructure,” said the court.

What is the background to the case?

A Polish haulage firm had filed a complaint about a bill for using German roads in 2010 and 2011, claiming that the charge was too high.

It said that truck tolls — which included the cost of traffic police — violated an EU directive on road charges stipulating that charges should only include infrastructure costs.

The original complaint was filed with an administrative court in Cologne, which dismissed the claim.

A higher administrative court in the German city of Münster suspended the appeal proceedings and asked the ECJ for interpretation.

The court’s advocate general for the case had already advised the court that the charges for traffic police should not apply.

The ECJ last year ruled against the implementation of tolls for private non-residents on German motorways — known as “vignettes” —  as these were deemed discriminatory.

What is the truck toll?

The charges on federal highways were introduced in 2005, as part of an effort to shift the burden away from taxpayers and ordinary road users. Instead, the idea was that operators of heavy vehicles that wear out the roads should pay more.

The toll applies to all trucks weighing more than 7.5 metric tons, with a differentiation in pricing depending on polluting vehicle emissions.

What does this mean?

The court in Münster — which is the higher administrative court for the state of North Rhine-Westphalia — must now issue a ruling on the Polish case. However, it is bound by the case law set by the Luxembourg judges.

Germany’s Transport Ministry announced shortly before the ruling that it would take note of the court’s findings. The verdict looks likely have an impact on future toll pricing.

DISCLAIMER: The Views, Comments, Opinions, Contributions and Statements made by Readers and Contributors on this platform do not necessarily represent the views or policy of Multimedia Group Limited.
Tags:
European Court of Justice
Freight companies