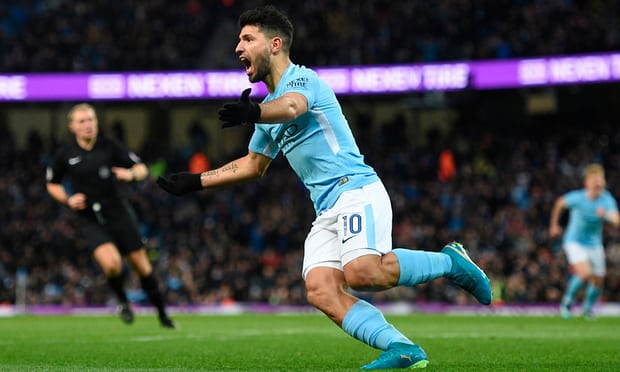 Sergio Aguero struck twice in two minutes as Manchester City came from behind to overpower Burnley 4-1 in the FA Cup third round.

Leroy Sane and Bernardo Silva also got on the scoresheet as City responded impressively to the shock of conceding a half-time lead to Ashley Barnes' superb opener at the Etihad Stadium.

The comeback, which will only increase talk of a City quadruple bid, was inspired by Ilkay Gundogan, the German setting up Aguero for both his game-changing goals in the 56th and 58th minutes.

Chelsea will have to see off Norwich at Stamford Bridge to progress to the fourth round of the FA Cup after the Canaries held the Blues to a goalless draw at Carrow Road on Saturday.

In a lacklustre and dull third-round tie, Chelsea failed to create a single shot at goal in the first half before Antonio Conte's much-changed side tested Norwich's goal in the second period.

However, they failed to find the all-important winner against a spirited Canaries side and will now have to beat Norwich in west London if they want to stand any chance of progressing through the competition which they came close to winning last season.

Peterborough pulled off a stunning FA Cup upset as three goals in the final 15 minutes earned them a 3-1 win against Aston Villa at Villa Park.

Villa had looked set to cruise to victory when Keinan Davis gave then the lead after only eight minutes.

But League One Peterborough produced a storming fightback against the Championship side and leading scorer Jack Marriott drew them level in the 75th minute.

The towering Ryan Tafazolli then gave them the lead with a header seven minutes from time before Marriott struck for the 23rd time this season in stoppage time with his fifth FA Cup goal of the season.

Sam Gallagher scored the only goal as Birmingham continued their recent revival with a 1-0 victory over Burton in the FA Cup.

Gallagher's 57th-minute strike earned Blues a place in the fourth round and a third successive victory without conceding a goal, having also toppled Leeds and Reading to move off the bottom of the Sky Bet Championship.

Burton were in good form themselves, picking up three wins and a draw in their previous five games, and they can feel aggrieved not to have got anything from their trip to St Andrew's.

The on-loan Chelsea defender rose highest in the 58th minute to head home the goal which ended a five-match winless run.

Paul Caddis hit the crossbar for the hosts and Danny Graham missed a gilt-edged chance as Rovers exited at the third-round stage for the first time since 2014.

Rajiv van La Parra and Danny Williams struck second-half goals barely a minute apart as Huddersfield booked their place in the fourth round of the FA Cup with a 2-1 win at Bolton.

Bolton pulled one back with 26 minutes remaining through a header from Derik Osede, who went close to firing an equaliser soon after in front of a disappointing crowd of 11,574.

Steve Cook headed an injury-time equaliser as Bournemouth battled back from two goals down to scrape an FA Cup third-round replay with League One leaders Wigan.

The Cherries looked to be heading out of the competition to lower-league opposition for the second successive season before Cook spared their blushes by making it 2-2 at the death.

Lys Mousset's first Bournemouth goal had given Eddie Howe's men hope after Paul Cook's in-form Latics built a two-goal first-half lead thanks to Will Grigg and an own goal from Emerson Hyndman.

Veteran striker Jon Stead's second half goal sent League Two Notts County into the fourth round of the FA Cup at the expense of Championship Brentford.

The big striker pounced on a slip by left back Ilias Chatzitheodoridis to run on unchallenged and fire an unstoppable drive into the far corner after 65 minutes.

New Brentford signing Emiliano Marcondes almost levelled with an injury time header from Josh McEachran's corner but the Bees' luck was out, and it bounced back off the upright.

Mansfield earned an FA Cup third-round replay against Cardiff by forcing a goalless draw in the Welsh capital.

Stags goalkeeper Conrad Logan kept the scores level at half-time before a host of second-half chances went begging for both sides.

Alex MacDonald and Paul Anderson had chances to seal a famous victory at a near-empty Cardiff City Stadium, but Steve Evans' side will at least be in the hat for the fourth-round draw.

A resilient Carlisle performance earned them an FA Cup third round replay with a 0-0 draw against Championship side Sheffield Wednesday.

Wednesday failed to make the most of their chances and were unable to provide interim boss Lee Bullen with a win in his last game in charge before new manager Jos Luhukay takes over on Monday.

Jack Grimmer's winner left Stoke boss Mark Hughes on the brink after Coventry dumped the Potters out of the FA Cup.

Defender Grimmer struck in the second half to push Hughes closer to the exit following the Sky Blues' 2-1 third-round win.

Calvin Andrew's first-half goal was enough to send Rochdale into the FA Cup fourth round after a 1-0 win at Doncaster.

Andrew headed home in the 18th minute as Dale gained revenge on Rovers for a 2-0 League One defeat at the Keepmoat Stadium only last Friday.

It was Andrew's fourth goal of the season as the striker glanced home Joseph Bunney's wicked free-kick from the left.

First-half goals from Salomon Rondon and Jay Rodriguez secured Albion's safe passage to the fourth round and gave Pardew a first win in nine games since succeeding Tony Pulis at the end of November.

Albion could even afford the luxury of a Hal Robson-Kanu penalty miss just before half-time, the Welshman sending his tame attempt too close to Exeter goalkeeper Christy Pym.

West Brom had gone 21 games without a win since beating Accrington in the Carabao Cup in August.

Southampton eased the pressure on manager Mauricio Pellegrino with a deserved 1-0 victory at Fulham in the third round of the FA Cup.

The club slipped to 17th in the Premier League on Tuesday after losing 2-1 at home to Crystal Palace in what was their ninth fixture without victory.

Championship Fulham had also won their previous four games at Craven Cottage, increasing the potential threat involved for an out-of-form side, but they instead progressed to the competition's next stage with a James Ward-Prowse goal.

Thomas' superb long-range effort in the 25th minute which flew into the top corner extended Ipswich's miserable recent record in the competition.

The hosts have not won an FA Cup match since January 2010 and did not like ending that run on Saturday, failing to record a shot on goal in the 90 minutes.

Aiden O'Brien fired Millwall into the fourth round of the FA Cup as his brace inspired Neil Harris' side to a 4-1 win over 10-man Barnsley.

After the visitors had gone ahead early on, the game turned during a 20-minute spell either side of half time, as O'Brien scored two goals and created another while Joe Williams saw red to remove any hope of a comeback.

Fred Onyedinma added a fourth to make sure as Millwill ended a run of five straight defeats against Barnsley in emphatic fashion.

Ayoze Perez set Premier League Newcastle on their way into the FA Cup fourth round as they launched a first-half blitz to see off battling Luton 3-1.

Perez struck twice from close range before Jonjo Shelvey helped himself to a third inside nine minutes to send the Magpies in at the break in compete control.

The League Two leaders launched a concerted second-half fightback after Danny Hylton had replied four minutes into the second half and then seen a second ruled out for offside, before substitute Elliot Lee rattled the crossbar with a curling free-kick.

But despite the impressive onslaught, Rafael Benitez's men saw the game through to complete a more than satisfactory festive programme.

Ousseynou Cisse scored the winning goal as League One's MK Dons knocked Sky Bet Championship side QPR out of the FA Cup with a 1-0 victory at Loftus Road.

Cisse scored on the hour mark courtesy of a farcical mistake by Rs midfielder Josh Scowen.

Scowen chased a misplaced pass from team-mate Grant Hall and by nudging the ball away from the right-hand touchline in order to keep it in play, he inadvertently sent Cisse through on goal.

Cisse took full advantage, shooting beyond keeper Alex Smithies and into the far corner of the net – the Mali international's first goal in English football.

Out of form Sky Bet Championship side Reading are now seven games without a win after they were held to a 0-0 draw by League Two's Stevenage in the FA Cup third round.

Troy Deeney's diving header snuffed out any threat of an upset as Watford eased past giant-killers Bristol City 3-0 and into the FA Cup fourth round.

Captain Deeney toasted his return from a four-match ban with his third goal of the campaign, adding to Andre Carrillo's drilled strike and Etienne Capoue's neat finish.

Bristol were unable to repeat the heroics that saw them dispatch Manchester United 2-1 on December 20 to reach the Carabao Cup semi-finals, amid a clinical Hornets performance.

Wolves were unable to claim another Premier League scalp in the FA Cup as their third round tie against Swansea at Molineux finished goalless and 10 aside.

Wanderers have an impressive record against top-flight opposition in the past 12 months, having won at Stoke and Liverpool in the FA Cup last season. Nuno Espirito Santo's runaway Championship leaders have also beaten Southampton this campaign in the Carabao Cup and took Manchester City all the way to penalties in the same competition.

Hopes were high in the Black Country that they could add Swansea to that list of victims and Wolves did have the better chances to score, until their momentum was interrupted by Ruben Vinagre's red card five minutes before half time.

Swansea came into the game a bit more thereafter but they were also reduced in number after 67 minutes when Leroy Fer was sent off.

Neither team could make a breakthrough and they will replay at the Liberty Stadium later this month.

Josh Harrop and Alan Browne both scored twice as Preston crushed Wycombe 5-1 at Adams Park in an FA Cup third round tie they controlled almost from start to finish.

Southampton loanee Marcus Barnes had a debut to remember for Yeovil as he scored in a 2-0 FA Cup third-round victory upset against Bradford.

The Glovers were the stronger side in the first half and Bradford had to put bodies on the line as Matt Kilgallon chested a fiercely-struck Tom James half-volley away inside the six-yard box.

The visitors improved after the break but it was Yeovil who made the breakthrough on 61 minutes. Otis Khan played in Barnes one-on-one on the counter and the man who only joined on Friday coolly slotted in.