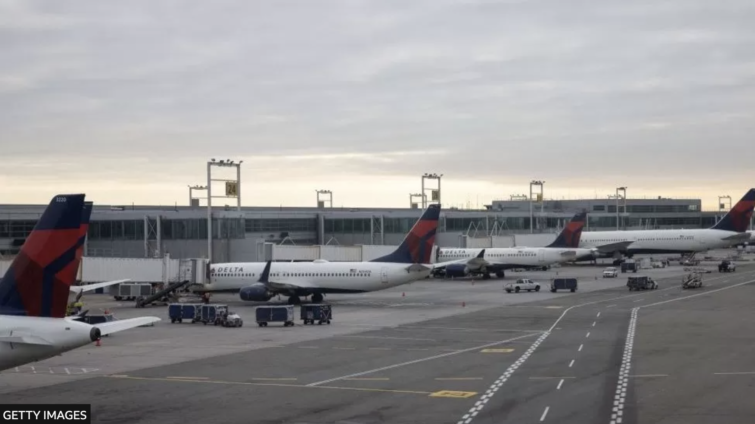 US officials have launched an investigation after two planes full of passengers almost collided at a New York airport last week.

One plane was about to take off while the other was crossing the same runway.

The collision was averted when an air controller noticed the two.

Using an expletive, the air traffic controller attempted to stop the Delta aeroplane as it was preparing to take wing.

The Delta Air Lines Boeing 737 then came to a stop on the runway, while the American Airlines Boeing 777 safely crossed in front of it around 20:45 EST (01:45 GMT), said the Federal Aviation Administration (FAA).

The FAA said the planes were around 1,000ft (300m) away from each other when the Delta aircraft stopped. It has since launched an investigation into the near collision.

Brian Heale, a passenger on the Delta plane, told BBC’s US news partner CBS that the plane came to a sudden stop, which he first thought was due to a mechanical issue.

“There was this abrupt jerk of the plane, and everyone was sort of thrust forward from the waist,” Mr Heale said.

He didn’t realise his near miss until he later read the news on social media.

“The pilot made the call to only share information on a need-to-know basis, and that was absolutely the right call, because it would’ve been pandemonium,” he said.

In a statement, Delta Air Lines said it will cooperate with the investigation into the incident. American Airlines did not release a statement and referred questions to the FAA.

The deadliest aviation disaster in history involved a collision between a Pan Am and KLM planes on the runway of Tenerife in Spain’s Canary Islands. The 1977 disaster killed 583 people and injured 61.

DISCLAIMER: The Views, Comments, Opinions, Contributions and Statements made by Readers and Contributors on this platform do not necessarily represent the views or policy of Multimedia Group Limited.
Tags:
Delta Airlines
FAA
John F Kennedy International Airport
Plane crash