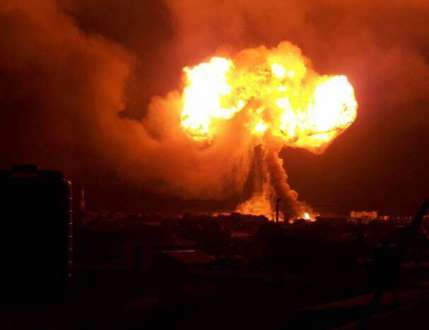 Residents and Traders at Abengakura a suburb of Damongo in the West Gonja Municipality of the Savannah Region have appealed to the Environmental Protection Agency (EPA) and the Ghana National Fire Service (GNFS) among others to help avert a looming danger in the regional capital.

The leader of the group, Gyimah Ibrahim, also known as Kashenten, is asking these stakeholders to
take a critical look at the siting of an upcoming fuel station close to his Fabrication and welding workshop.

According to Mr. Gyimah, apart from his metal activities which he uses fire for, the fuel station will also pose as source of danger to pupils of three basic schools, hence the need for the mandatory bodies to intervene before the Municipality is bedeviled with a preventable disaster.

“One day, I came to work and saw sand at the back of my workshop and later, I saw a block moulding machine and few days later, I spotted two workers there and now, underground fuel tankers.

So, I know the kind of work I do and if a filling station is being sited at the back of my welding shop, it’s a time bomb waiting to explode” Mr. Gyimah Ibrahim recounted.

He said he has on behalf of the group, written letters to major institutions drawing their attention to the situation and is yet to receive any response.

“I wasn’t happy and so, I wrote a letter to EPA and copied NADMO, and Fire Service to help me know the person who is siting the filling station and how we can solve the issue” he noted

Mr. Gyimah Ibrahim said he has been practicing his welding trade at this location since the year 2013, and has trained 32 people in Damongo and currently training , 27 more.

“This is a welding and fabrication shop. Strengthening, Spraying, Drilling and welding and I’m here to help the region”, He indicated.

Mr. Gyimah stated that he returned to his native hometown Damongo to help his people with his metal work expertise therefore the need for the appropriate stakeholders to intervene.

“This fuel station will be a danger and threat to all the people in Damongo.” He added

He said he has documentation covering the land.

Under the EPA regulations and safety guidelines, a new fuel station must among others, be able to acquire all the necessary permits to guarantee its eligibility to operate.

They include a no objection letter from the National Petroleum Agency (NPA), a Zonal Status Letter from the District Assembly and a Permit of feasibility study of environmental impact assessment by the Environmental Protection Agency(EPA ) and fire engineering drawing plan from the Ghana National Fire Service.

But deep throat sources at the EPA alleged that the Agency has already granted its permit without due diligence, hence the posture of the Savannah Regional Manager of EPA, Gimah Sore declined to touch on the issuance of permit by his outfit but rather on a letter complaining about the same parcel of land.

“We have to go and know exactly what the situation on the ground is. So, until we get there and undertake an investigation and see what’s exactly there, we can’t give any comments” he said

When asked whether it was possible for fabrication and welding shop and fuel station to operate within a distance of less than 300 meters, Mr. Gimah responded, “the two facilities should under no circumstance co-exist.

“You know as it is welding and fabrication, it’s heat producing source which the complainant is talking about. So, it’s something that is volatile and in actual fact, depending on where they have located them. You know all these things and that’s why I don’t want to comment until we go there and take the exact information so that we can give you the right information”, the EPA Manager said.

But a day after our first visit, JoyNews made a follow up at the offices of EPA after they have visited the said location but Mr. Gimah Sore again said he was not ready to speak on whether the EPA has issued a permit for the construction of the said fuel station near the fabrication shop.

The reactions by officials at the West Gonja Municipal Physical Planning unit and the Customary Land Secretariat, both Officers, Alhassan and Mark Limon, were not different as the two declined knowledge of ownership of the parcel of land on which the fuel station is being built.

Meanwhile, former District Chief Executive for West Gonja Municipality, Bakari Ali Kasim told JoyNews in a telephone interview that as of 2015 to 2016 the said land space for the fuel station was vacant and could not have been occupied by anybody and wondered how the National Petroleum Agency (NPA) issued a building permit dated 6th May, 2014.

JoyNews is however, yet to establish the true ownership of the upcoming fuel station.