Fact check: Trump delivers the most dishonest speech of his presidency as Biden closes in on victory 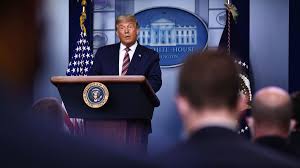 President Donald Trump delivered the most dishonest speech of his presidency on Thursday evening.

I’ve watched or read the transcript of every Trump speech since late 2016.

I have never seen him lie more thoroughly and more egregiously than he did on Thursday evening at the White House.

On the verge of what appeared to be a likely defeat by former Vice President Joe Biden, Trump emerged in the press briefing room and took a blowtorch to the presidential tradition of defending the legitimacy of the democratic process.

This is entirely baseless. This election is legitimate. Trump’s opponents are not trying to steal it.

Trump claimed that he “won” the states of Wisconsin, Michigan, Pennsylvania and Georgia, citing his substantial early leads in the vote counts there.

This is false. Holding a lead before all of the votes are counted is, obviously, not the same as having won — and Trump has lost Wisconsin and Michigan, according to CNN projections.

At the time of his speech, he was also in trouble in Pennsylvania as votes from Democratic-leaning areas were counted, and his margin in Georgia was shrinking fast as the count continued.

Trump called mail-in voting “a corrupt system,” adding later that there is “tremendous corruption and fraud going on.”

Facts First: This is also just wrong. Fraud is exceedingly rare with mail-in voting; though it does happen on occasion, there is no basis on which to call the entire system corrupt.

The legitimacy of the count, part 1

Facts First: This is, again, just false. Trump was on the verge of defeat because legal votes continued to be counted.

There was no basis for his suggestion that “illegal votes” were being counted, certainly not that such votes were the reason he was in electoral trouble.

The legitimacy of the count, part 2

Trump claimed, “We were winning in all of the key locations by a lot, actually, and our numbers started miraculously getting whittled away…” He added, “They want to find out how many votes they need and then they seem to be able to find them.

They wait and wait and then they find them…”

Facts First: There is no basis for Trump’s suggestion that something nefarious had caused some of his leads to shrink or that anybody was nefariously manipulating the vote counts. His leads had shrunk in some states because entirely legitimate mail-in ballots were being counted.

Because many more Democrats than Republicans chose to vote by mail, the order of the counts in these states caused Trump to lose ground in the vote totals over time.

In other states like Florida, where mail-in ballots were counted earlier than in-person votes, Trump actually gained ground in the totals over time — as he has in Arizona, which remained too close to call at the time of his speech.

The legitimacy of the count, part 3

Trump claimed, “In multiple swing states, counting was halted for hours and hours on election night, with results withheld from major Democrat-run locations, only to appear later. And they certainly appeared, and they all had the name Biden on them, or just about all, I think almost all.

They all had the name Biden on them, which is a little strange.”

Facts First: Trump’s innuendo is baseless. Different states counted their ballots at different speeds, but there is no basis to claim that results were suspiciously “withheld” — some counties and states always take a while to count and to report — or that there was something suspicious about Biden’s dominance in the late stages of the count in some states.

Biden handily led Trump in these batches of ballots, but Trump was getting tens of thousands of votes from mail voters in places like Pennsylvania and Michigan, too.

The legitimacy of the count, part 4

Trump said, “It’s amazing how those mail-in ballots are so one-sided.

“Facts First: There is nothing suspicious about the fact that far more Biden voters than Trump voters chose to vote by mail: Biden encouraged his supporters to do so, while Trump relentlessly disparaged mail-in voting as fraud-prone and unsafe.

Trump made some brief exceptions during the campaign, saying at one point that mail voting in Florida was safe and secure, but his dominant message to his voters was that they should vote in person.

Democrats and the count

Trump said, “There are now only a few states yet to be decided in the presidential race.

The voting apparatus of those states are run in all cases by Democrats.”

He later added that “the election apparatus in Georgia is run by Democrats.”

There is also no basis to suggest that the Democratic election officials in other states have done anything wrong.

And it is local counties that actually count the votes.

Trump declared that “no illegal votes” should be allowed to be cast after Election Day, suggesting that such illegal voting was happening.

And some states accept mail ballots received after Election Day if they are postmarked on or before Election Day.

Trump claimed that states had sent out tens of millions of “unsolicited” ballots “without any verification measures whatsoever.”

He was referring to states that mailed a ballot to each eligible registered voter without requiring a specific request.

Facts First: This is a familiar Trump claim, and it remains wrong.

The nine states (plus Washington, DC) that sent out such ballots have various ballot security measures in place, such as signature-match requirements, to ensure the correct people are voting. It’s worth noting that one of the states that sends out “unsolicited” ballots is Republican-run Utah, which Trump is projected to carry for the second consecutive election.

Trump claimed, “Detroit and Philadelphia, known as two of the most corrupt political places anywhere in our country, easily, cannot be responsible for engineering the outcome of a presidential race, a very important presidential race.”

Facts First: There was no basis for Trump’s suggestion that Detroit and Philadelphia had done anything wrong in this election, much less that they were “engineering the outcome.” Their local counties were simply counting votes, like every other local county.

Trump claimed, “Our campaign has been denied access to observe any counting in Detroit.”

Facts First: This is false. CNN reporter Annie Grayer said she has observed representatives of the Trump campaign roaming for three days at the TFC Center, where the counting of Detroit’s mail ballots is taking place.

And on Monday, the first day of the counting of these ballots, Grayer took a photo of Republican poll challengers checking in at the facility.

Detroit’s corporation counsel (principal attorney), Lawrence Garcia, said there were approximately 225 Republican poll challengers in the facility on Wednesday, along with 256 Democrats and 76 independents, Grayer reported.

Grayer said she has seen two people get kicked out, one a Republican who refused to wear a mask over their nose and one of undetermined affiliation for causing a disturbance while wearing a Halloween mask. But that’s not the same as no Trump observers being allowed at all.

Trump claimed, “One major hub for counting ballots in Detroit covered up the windows again with large pieces of cardboard and so they wanted to protect and block the counting area.

They didn’t want anybody seeing the counting, though these were observers, legal observers that were supposed to be there.”

Facts First: This is misleading: Republican poll challengers were already inside the facility in Detroit when some windows were covered on Wednesday after additional Republicans arrived on scene.

Garcia said in a statement: “Some — but not all — windows were covered, because poll workers seated just inside those windows expressed concerns about people outside the center photographing and filming them and their work.

Only the media is allowed to take pictures inside the counting place, and people outside the center were not listening to requests to stop filming poll workers and their paperwork.

Hundreds of challengers from both parties were inside the central counting board all afternoon and all evening; dozens of reporters were in the room too.

At all times, people outside the center could see in through windows that were further away from counting board work spaces.”

A pipe bursting in Georgia

Trump claimed, “In Georgia, a pipe burst in a faraway location totally unrelated to the location of what was happening, and they stopped counting for four hours.”

Facts First: It’s not true that the burst-pipe issue in Atlanta happened in a location unrelated to the vote count.

The pipe burst in a room at State Farm Arena that local officials said was above the processing room for Fulton County absentee ballots.

The issue did cause a four-hour delay. No ballots were damaged, officials said.

The legitimacy of pollsTrump delivered some legitimate criticism of the inaccuracy of many polls. But then he said that “the pollsters got it knowingly wrong,” saying they were attempting the “suppression” of his supporters.

Facts First: This is baseless. Trump was correct that some polls were way off, but there is no evidence that pollsters were trying to be wrong — at considerable public embarrassment to themselves.

The status of the Senate

Trump said, “We kept the Senate despite having twice as many seats to defend as Democrats.”

Facts First: It was unclear at the time whether Republicans would keep the Senate — in part because one race in Georgia was heading for a January runoff election and other Georgia race appeared likely to be going to a runoff as well.

(Some additional Senate races in other states, in which Republicans held leads, had also not yet been called by media outlets.)

DISCLAIMER: The Views, Comments, Opinions, Contributions and Statements made by Readers and Contributors on this platform do not necessarily represent the views or policy of Multimedia Group Limited.
Tags:
Biden
Presidency
Speech
Trump
US elections 2020