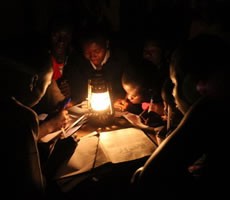 Residents of Ekumfi Potwaben, a farming community in the Mfantseman East constituency under the newly created Ekumfi District Assembly have warned, they will not allow any political party to campaign in their community for the 2012 general elections, if their seven year old abandoned electricity project is not completed.

They have promised the parties they will also destroy all posters of any political party in the community and block the road on Election Day.

The small community of Ekumfi Potwaben has seen an increased number of campaign posters belonging to the various political parties displayed all over – a situation the people say is an indication that their votes are equally important on December 7, 2012.

According to the youth and opinion leaders, they have been marginalized by successive governments for a long time and this time round, will not allow politicians to take them for granted.

The community, which is located some four miles from the big commercial town of Mankessim, lacks basic amenities such as potable water, a health facility, and electricity.

In 2007, the Kufuor government through the Electricity Company of Ghana connected them to the national grid with four lamps serving as street light for the whole community without house hold supply to residents.

Households were made to pay Ghc 10.00 (ten Ghana cedis) each for electricity meters to enable them enjoy the facility, but five years on, the meters have not been installed.