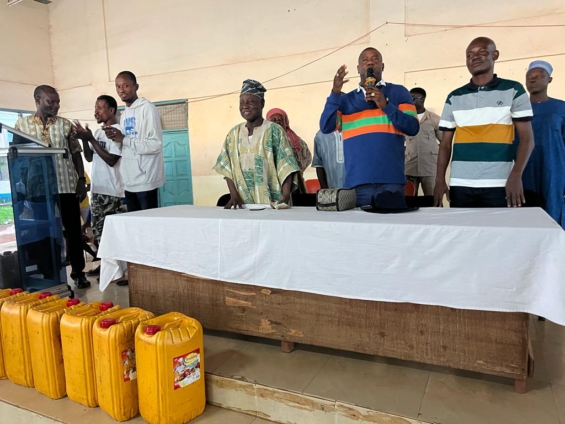 Member of Parliament (MP) for Yendi, Alhaji Farouk Aliu Mahama has made a donation of food items to the Yendi Senior High School in the Northern Region.

The donation was in response to an emergency request and an appeal made by the Headmaster of the School, Chief A. M. Hussein to the Member of Parliament to salvage the school from its current food crisis.

The items include 10 big gallons of cooking oil, 10 big cartons of tin tomatoes, mackerel and an amount of GHC 5,000 for the purchase of some bags of rice.

Presenting the items, Alhaji Farouk Aliu Mahama said government is putting in measures to ensure that the delivery of food to the Senior High Schools is very regular.

He stated that the responsibility bestowed upon him as an MP is to initiate developmental projects and ensure the well-being of his constituents, which includes Yendi SHS students.

“I have made several personal donations to the Yendi SHS including 15 Sewing machines to the school’s Vocational Departments, 50 bags of cement and GHC5,000 for the renovation of the school Mosques.”

Alhaji Farouk Aliu Mahama revealed that education is a top priority on his agenda and that the request was not a worry to him.

He said his office is initiating the Alhaji Aliu Mahama Presidential Library project, an ultra-modern ICT library project to be built in the Yendi SHS and named after his late father, former Vice President of Ghana, Alhaji Aliu Mahama.
“I am again making a personal pledge of GHC10, 000 to the best student of this school who will pass the yet-to-be-written WASSCE to the University.”

The Headmaster of the School, Chief Husein said the donation is a big relief to the school. He said Yendi is lucky to have an MP who ‘talks and do’ and that his promises to the school has never failed.

Chief Hussein thanked Alhaji Farouk Aliu Mahama for the gesture and expressed the hope that government will deliver the food items to the various schools.

A student, name withheld, revealed that for two months students have been taking porridge without sugar adding the school normally served over 100 saucepans but has now been reduced to 70 saucepans because of the food crisis.