Fashion designer remanded for attempting to sacrifice nephew for money 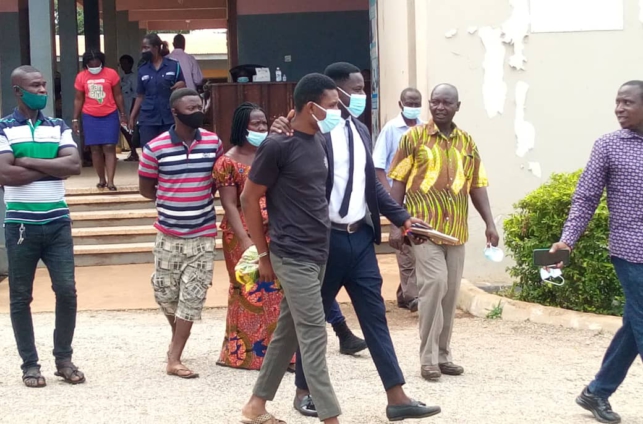 Benjamin Adjei, the 23-year-old fashion designer arrested on his way to sacrifice his nephew for money has been remanded into prison custody for two weeks.

Adjei, who was charged with preparation to commit a crime, to wit, murder on May 17, this year will reappear on June 16.

According to the prosecutor, Sergeant Eric Agyenim Boateng, the police have completed their investigations and forwarded the docket to the Attorney General’s Office for advice.

The Sunyani Magistrate Court A, presided over by Joojo Hagan, refused the accused, Benjamin Adjei, bail when his lawyer, Eric Frimpong Boamah, appealed.

A position the prosecutor argued against on the grounds of the accused staying in the same community, Abesim, a suburb of Sunyani, with the victim, 13-year-old Listowel Adjei.

Some family members openly accused the prosecutor after the court proceedings of deliberately bringing Benjamin Adjei out for the media to capture him on camera while raining insults on the media personnel present.

This comes on the back of allegations that some relatives contacted the police to handle the case at the family level.

But the Sunyani Divisional crime officer, DSP Kingsley Owiredu, said two weeks ago though he is not aware of the alleged plans by the family to have the case resolved at home, the police will not compromise on the case since it is a crime against the state.

And up-to-date happenings indicate the state is going ahead with the prosecution despite the subtle attempt and resistance by some relatives of the accused person.

Benjamin Adjei was arrested on May 15, by the Abesim police for an alleged attempt to sacrifice his nephew, Listowel Adjei, for quick money.

The police, who had been working with the informant for weeks, accosted him at Tanoso barrier, on the Sunyani Kumasi road and arrested the suspect with his nephew together with a handbag containing one big cutlass, a knife, red calico, a big pot, some cola nuts, cowries, and ¢300.

The police explained that the accused confessed to the crime upon interrogation and was later charged with an attempt to commit a crime to wit, murder.

He was arraigned before the court on May 17, where he was remanded into police custody for two weeks.

But at his appearance in court for the second time, Benjamin Adjei has been remanded into prison custody until 16th June 2021 pending the AG’s advice.