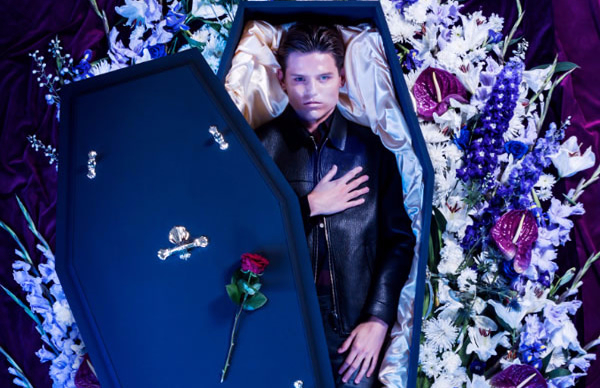 A fashion house has released a creepy range of ' coffin couture ' so be people can look stylish even when six feet under.

According to new research, 85% of Brits have thought about their final outfit.

But some are more casual in their approach – with a third of men keen to be buried in a baseball cap, and fifth happy to meet their maker in flip flops.

The survey was conducted by fashion company list for their new 'Over My Dead Body’ collection.

They gave coffin-clad models macabre makeover to show off the range of 40 mens' and clothing, jewellery and accessories

Lyst’s survey on the nation's appetite for six-foot-under styling revealed:

1. 52% of women want to go down in style, opting for a high fashion couture outfit, while a more casual contingent (31%) would opt for their favourite nightwear as their preferred option

3. For ladies, with pain no issue, heels dominated the footwear choice with 45% choosing stilettos for their two feet in the grave.

4. Over half of the men surveyed cited business footwear and brogues as their shoes of choice.

5. Overall, men seemed to lean more towards casual than their female counterparts, with a fifth of men wanting to wear flip-flops and just under a third (31%) would like to take their longest nap in a baseball cap.

6. Price is seemingly no barrier to looking good in the afterlife, with people prepared to splash out on their final outfit. While the majority (45%) set their limit at £350-£499 and a more thrifty 30% would spend less than £100, a sizeable 24% were prepared to pay over £1,000 for their outfit – clearly signalling that fashion has no expiry date, even if we do.

Katherine Ormerod, editorial director of Lyst, said: "What we wear is such a huge reflection of who are and our personalities that it's unsurprising that people now have a clear picture of what they want to be buried in.

"They say life's too short for boring clothes, we agreed and took it one step further.

"Death is too long to get your last outfit wrong."