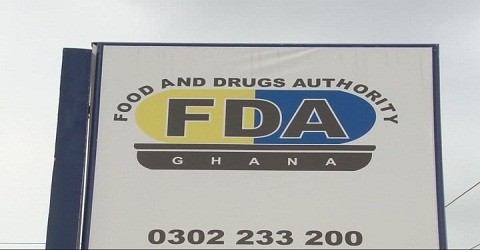 The Food and Drugs Authority (FDA) has closed down Aflab Warehouse, a Coca-Cola products distributor, for supplying expired coca-cola drinks to a basic school canteen in Koforidua.

The FDA has also asked Aflab warehouse to pay an administrative fine of GHC25,000.00 in addition to GHC1,200.00 for the safe disposal of the expired products found in the warehouse in line with the Public Health Act, Act 851.

The FDA as part of its surveillance and monitoring activities in basic schools in New Juaben, found a stock of Coca-Cola products including sprite, Coca-Cola and Fanta orange drinks which had expired in December 2019.

The authority’s checks showed that despite the expiration of the drinks in December last year, the products were distributed to the school on January 21, 2020, with the intent of selling same at the school’s canteen.

Further investigations revealed that as at the time of the visit by the FDA, 20 out of the 100 cartoons of the drinks supplied had already been sold at the school’s canteen to the unsuspecting school children.

Samuel Kwakye, Regional Director of the FDA who briefed GNA, indicated that further checks at the warehouse showed that the environment was not up to standard to store consumable products and therefore had to be shut down, with the suspension of operations in addition to the administrative fine.

He explained that pursuant to the Public Health Act, Act 851, warehouses must be licensed and periodically inspected by the FDA to ensure that the quality of products was not compromised.

According to the FDA, the administrative fine and closure of the warehouse was the first step in line and failure to comply would be prosecuted in line with the provisions of the law.

He has therefore urged parents to educate their wards to check for expiry dates on every consumable they purchase in school to instill the habit of checking the state of products before consuming to avoid complications.

DISCLAIMER: The Views, Comments, Opinions, Contributions and Statements made by Readers and Contributors on this platform do not necessarily represent the views or policy of Multimedia Group Limited.
Tags:
Coca-Cola
FDA