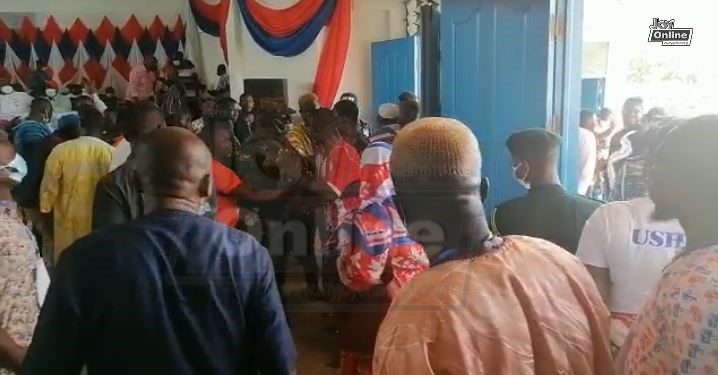 A brawl broke out at the New Patriotic Patriotic Party’s (NPP) delegates conference in the Bono East Region on Wednesday.

The incident saw persons believed to be bodyguards of the Municipal Chief Executive (MCE) of Atebubu Amanteng, Edward Ofori clash with the party’s internal security.

The supporters who accompanied the MCE to the venue claim they were denied entry into Atebubu Training College’s assembly hall, where the event was being held.

The party’s security had insisted that only the MCE would be granted access because of his capacity as a delegate.

But it did not go down well with Mr Ofori’s supporters.

However, the misunderstanding degenerated into a fight between the MCE’s bodyguards and NPP’s internal security personnel.

A fisticuff ensued as slaps and blows were the MCE’s men, numbering about eight, were being prevented from accessing the hall.

It took the intervention of the police and military to restore calm.

The joint state security team dragged the bodyguards away from the scene.

Meanwhile, the Municipal Chief Executive (MCE)  Amanteng left the premises during the disturbance and declined a request for comment on the matter.