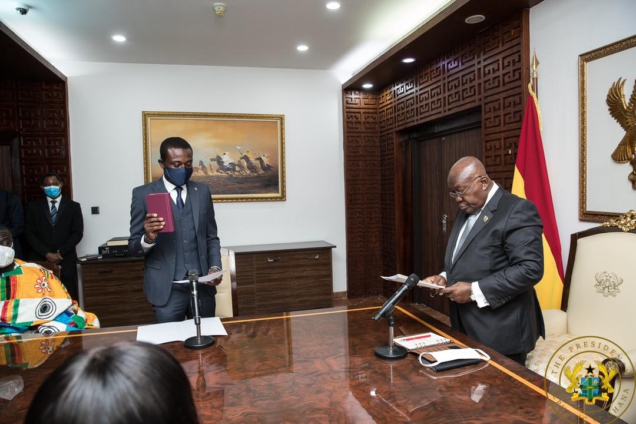 “I ask the new Special Prosecutor to bear in mind at all times that the Office carries an extraordinary responsibility to fight corruption independently and impartially. Indeed all institutions of state will work and cooperate with him in the same spirit which he articulated at his approval proceedings in Parliament,” President Akufo-Addo said this during the swearing-in of Kissi Agyebeng at the Jubilee House Thursday.

According to the President, the government, including the Executive and the Attorney General will respect the independence of his office and provide him with whatever assistance is required to enable him to discharge his duties effectively.

President Akufo-Addo also urged other institutions to support and cooperate with Kissi Agyebeng in the discharge of his duties, explaining that the activities of the Special Prosecutor no matter how vigorous, cannot provide the entire panacea to the problem of corruption.

“Government will continue to give stronger budgetary assistance to the other constitutionally mandated institutions that hold government accountable and help fight corruption, that is the Auditor General, Parliament, the Police Service, Judiciary, the Ministry of Justice, CHRAJ and EOCO,” the President added.

The 43-year-old Lawyer takes over from Martin Amidu who resigned from office in November 2020 after accusing the President of interference in his work.

Mr. Agyebeng was vested with the new authority on Thursday at the Jubilee House in the presence of the Chief of Staff, Attorney General, other government officials, and some traditional leaders.

According to his profile on the University Of Ghana School Of Law website, Mr Agyabeng has been a lecturer since October 2006, teaching and researching Criminal Law, International Humanitarian Law, International Law, Corporate Law and Legal Research and Writing.

He was awarded the Bentsi-Enchill Prize for Best Graduating Student of the University Of Ghana School Of Law in 2001.

He proceeded to the Ghana School of Law and was called to the Ghana Bar in October 2003, earning the E.N. Sowah Memorial Prize for Best Student in Family Law.

Since then, he has successfully argued numerous cases before the superior courts of Ghana and participated in several international arbitration hearings.

He is also an associate at the African Centre for Cyber Law and Cyber Crime Prevention and the National Moot Court Coordinator for the Commonwealth Moot Court Competition on International Criminal Justice.

He has also served as the Vice-Chairman of the Appeals Committee of the Ghana Football Association (GFA).