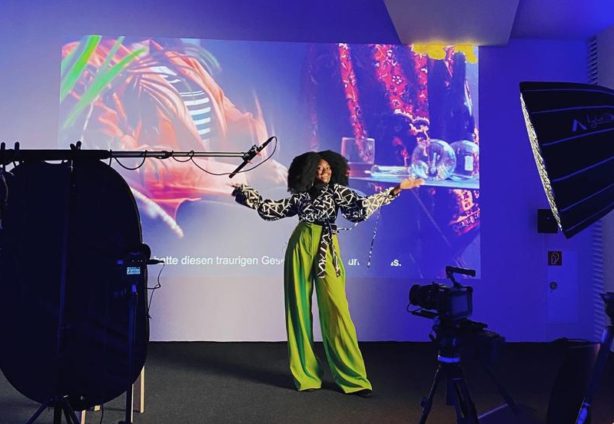 The documentary, directed by Kuukua Eshun, was inspired by two women’s decision to be vulnerable with each other.

It was also produced by Akpene Diata Hoggar and Kuukua Eshun.

This film was commissioned by the ANO Institute of Arts & Knowledge and was first shown at the Museum Ostwall Im Dortmunder U on December 10.

The film will be showing in the museum till March 6. This same museum has works of the famous Pablo Picasso and celebrated Ghanaian artist, El Anatsui.

The documentary is part of an exhibition by Ghanaian author and filmmaker Nana Ofori-Atta Ayim when she curated “EFIE: The Museum as Home” at the Dortmunder U culture centre.

Speaking during the film’s private screening, Kuukua expressed her gratitude to the German officials in charge of Culture and Arts in the Dortmund area. She was excited about the opportunity given her by the curator, Nana Ofori-Atta Ayim.

Kuukua Eshun is one of the fast-rising young female directors based in Ghana.

Having worked with artists and platforms like; Michaela Coel, Wizkid and Vic Mensa, Huawei, Facebook, Variety Magazine, Lifetime TV, The Economist, among others, Kuukua Eshun has built a legacy of telling stories that express strength and dominance through accessing spaces of feeling, sensitivity and dichotomous human experiences.

She disclosed that the project hits close to home for her and the women who were part of the film since they shared first-hand experiences on sexual assault on different occasions at different times in their lives.

Ultimately, Kuukua hopes to set up organisations that will consistently create a safe space for survivors of sexual violence.

She believes this will encourage more people to share their stories and experiences without fear or doubts of being judged due to the stigma against survivors.

DISCLAIMER: The Views, Comments, Opinions, Contributions and Statements made by Readers and Contributors on this platform do not necessarily represent the views or policy of Multimedia Group Limited.
Tags:
Kuukua Eshun
Ostwall Im Dortmunder U