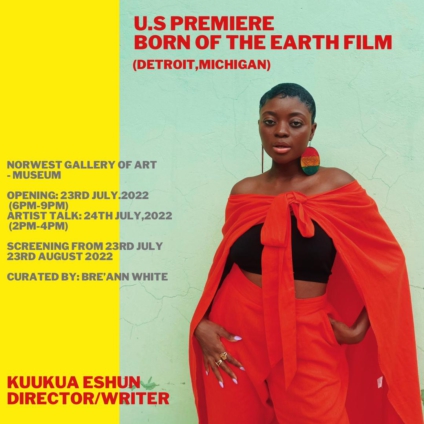 Kuukuaa Eshun, a Ghanaian film director, artist, and writer, has been chosen as the sole African to premiere her new film in an exhibition called “Pray for Us” at the Norwest Gallery in Detroit, Michigan, in the United States of America.

However, this wouldn’t be the first time Kuukua would have her movie premiere in Detroit. The 14 international award-winning short films “Artist, Act Of Love” by Kuukua were screened in Detroit as part of the Respublica festival in 2019.

Kuukua has had a very successful career in the past few years because of her excellent visual storytelling skills.
Starting with a poem, like most of Kuukua’s efforts, these videos represent the development of a unique visual language that draws inspiration from the flows of lyrical sources of writing.

Through her poetry and films, Kuukua, who draws inspiration from feelings and femininity, promotes social justice and mental wellness.

It’s unusual to witness an African woman filmmaker achieve success at a young age in the film and art industries while still being an inspiration and a real person.

She most recently directed the first short film from Africa for the Grammy-nominated album “Made In Lagos” by the superstar Wizkid.

Soon after, she screened “Unveiling,” a documentary that discusses sexual violence against women. Two women were vulnerable with each other, unveiled their realities, and allowed one to recognize herself in the other, which resulted in the creation of the documentary “Unveiling.”

The ANO Institute of Arts & Knowledge commissioned this project, which debuted in Germany for three months at the Museum Ostwall Im Dortmunder U. Pablo Picasso and renowned Ghanaian artist El Anatsui both had pieces on display in the museum.

Following this success, “Born of the Earth” was exhibited next, most recently at the DAK’ART Biennale in Dakar, Senegal, which is regarded as the largest festival of modern African art in the entire globe.

Only a few gifted black artists are invited to exhibit their work at the biennale as a way to celebrate African art and network.

People are taken on a journey by “Born of the Earth,” where they learn what it means to feel acceptance and freedom. The message that Black people, especially Black women are not enough has persisted for a long time, and this movie shows the spirit of reclaiming power, eradicating the stigma, and realizing its worth.

An interview programme regarding the movie and the sources of Kuukua’s directing will be part of the premiere.

The premiere will be a component of the exhibition curated by Bre’Ann White, whose life’s work is to empower her community and provide a voice and platform for the unbounded strength and beauty of the black experience through photography and top-notch creative direction.