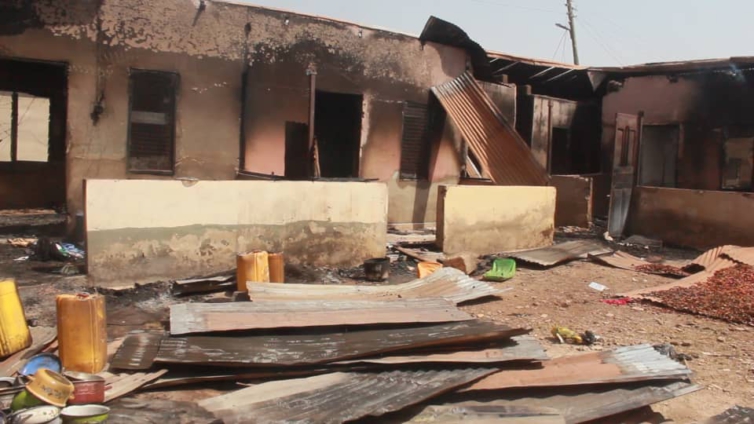 A 16-room compound house at Kobilmahagu a suburb of Tamale has been razed down after a fire broke out this morning.

Occupants of the house had to escape leaving their property behind.

The occupants said they heard shouts of fire, and when they stepped out of their rooms they saw the entire house engulfed in smoke.

Unfortunately, they were unable to salvage any of their belongings.

The landlord, Musah ibn Ahmed said majority of the occupants had reported to him of the constant power fluctuation in the house since last night’ adding that it could be the cause of the fire.

He said it was a passerby who saw the fire on the roof and rushed in to inform the occupants.

“I got here and one side of the house was already burnt and we called the fire service. We were not able to take anything out. I believe it is an electric problem because when I got here a tenant had informed me about a power fluctuation they experienced last night,” he said.

The occupants of the house said the fire service delayed in arriving, thus by the time they arrived there was no longer anything to be salvaged.

They could neither douse the fire with water as the pipes were not flowing.

“We have a lot challenges in this area among them is power fluctuation, lack of water and roads. If we had water in this vicinity we could have extinguished the fire ourselves,” a tenant lamented.

The Northern Regional Acting Public Relations Officer of the Ghana Fire Service, Baba Hudu who was at the scene said his men arrived on time and started fighting the fire but realized there was one person still in the building.

According to him, the crew  had  to evacuate the person before extinguishing the fire.

“Our  men got here and realised there was still a person in the house and we had to evacuate the person before fighting the fire,” he said.

He called on the general public to always report fire out breaks on time.

“The occupants were fighting the fire by themselves until they realised it was getting out of hand before they called which made our work very difficult,” he said.

Mr Hudu said investigations are underway to ascertain the actual cause of the fire.

“We have some little information which is not enough so we are going to do thorough investigation to find the cause of the fire,” he said.