Fitch maintains Ghana’s Credit Ratings at B with negative outlook 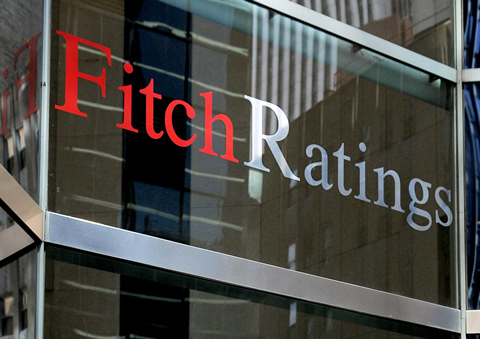 Ratings Agency, Fitch, says Ghana's economy is still exposed to serious shocks because of rising external deficits and fears of spending outside the approved budgets this year.

The agency said this after it maintained the country’s credit ratings at B, but with a negative outlook.

FITCH is also warning that any further drop in commodity prices could seriously affect the economy in the coming months.

The Agency however stated that growth could only pick up this year if the commodity prices as well as crude oil production,  from TEN  and jubilee oil fields  improve in the  coming months.

Below is the full statement issued by FITCH

Ghana's Country Ceiling and the Short-term foreign currency IDR have been affirmed at 'B'. KEY RATING DRIVERS The ratings and Outlook reflect the following factors: Ghana's fiscal and external deficits leave the country vulnerable to domestic and external shocks, including low oil prices and tight financing conditions.

Fiscal slippage ahead of the November elections would increase inflationary and financing pressures. A further decline in commodity prices would negatively impact growth and exacerbate Ghana's twin deficits. The Ghanaian authorities made significant progress on fiscal consolidation in 2015, narrowing the fiscal deficit to an estimated 7.2% of GDP, from 10.2% in 2014.

The country's fiscal reform agenda is supported by an USD918mn Extended Credit Facility arrangement with the IMF, of which Ghana successfully concluded its second review in January. The Fund programme helped the government keep expenditures in line with revised 2015 budget while earning revenues in excess of what was forecast in the budget.

The 2016 budget calls for a further narrowing of the deficit, to 5.3% of GDP. However, Fitch believes that the narrowing will be smaller and forecasts a 2016 fiscal deficit of 6.3%. The 2016 growth outlook is dependent on a combination of domestic and external factors. Domestically, oil and gas production will increase as the Tweneboa, Enyenra and Ntomme oil fields come online in August and add 23,000 barrels per day in oil production and associated gas exploitation will bring an approximate 50% increase in gas production.

The agency expects the cedi to trade at an average exchange rate of 4.1/USD; this would be a depreciation of about 8% from the 2015 average compared with the 22% depreciation that the cedi experienced in the previous year. In its most recent Monetary Policy Committee (MPC) meeting, the Bank of Ghana chose to keep the monetary policy rate at 26%, where it sits after five rate hikes in 2015. The MPC noted that exchange rate stability had contributed to February monthly inflation dropping slightly to 18.5%, from 19% in January.

Inflation expectations remain high and the current level is still well above the target band of 8+/- 2%. For these reasons, Fitch expects the central bank to maintain a relatively tight monetary policy in 2016, which will be supportive of greater price and exchange rate stability.

The depreciating exchange rate has led to a deterioration in the asset quality of the Ghanaian banking sector. The ratio of non-performing loans (NPL) to total loans increased from 11% in June 2015 to 14% by October. Increasing NPLs are a risk, but overall the Ghanaian banking sector remains liquid and well-capitalized. The rating is constrained by low GDP per capita, which at USD1,313 is less than half the 'B' median.

However, the 7.2% annual growth rate that Ghana experienced in 2005-14 substantially increased the country's performance on human development indicators. RATING SENSITIVITIES The main factors that individually, or collectively, could trigger negative rating action include: – Failure to consolidate the budget deficit and stabilise debt levels, or to ease domestic financing conditions. – Failure to stabilise international reserves. – Failure to improve macroeconomic stability, in particular to control inflation. The Outlook is Negative.

Consequently, Fitch's sensitivity analysis does not currently anticipate developments with a material likelihood, individually or collectively, of leading to an upgrade. However, future developments that may, individually or collectively, lead to a revision of the Outlook to Stable include: – Continued progress on fiscal consolidation efforts that is consistent with debt peaking in 2016 and then declining. – An improvement in Ghana's external position that includes a narrowing of the current account deficit and the rebuilding of the external reserves position.

KEY ASSUMPTIONS Fitch assumes that Ghana's new oil production comes on stream towards the end of the forecast horizon; the continued development of the gold sector; and further investment in infrastructure. Fitch assumes Brent oil prices will average USD35 in 2016, USD45 in 2017 and will rise gradually to USD65. Fitch assumes an IMF programme remains in place through the 2016 elections.