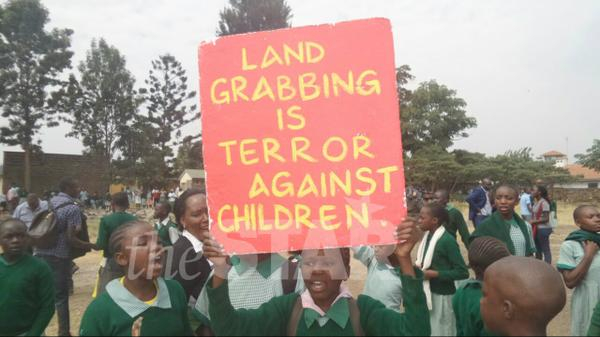 Five pupils were injured and two activists arrested in the protest against the grabbing of the Lang'ata primary school playground on Monday morning.

Two journalists and a police officer were also injured in the incident.

Officials said the activists had no right to lead the protest which they said was illegal.

Lang'ata OCPD Elija Mwangi said the protest was not the right approach to settling the land dispute.

Mwangi warned protesters against involving children saying those above the age of eight can be arrested.

He refuted earlier reports that the police used tear gas to disperse the activists.

The pupils waved signs terming the alleged grabbing of their playground "terror against children".

They also carried stones and attempted to bring down the property's gate.

The activists, alongside the school's management, demolished the wall separating the school from Weston hotel.

The protest resulted in a traffic snarl up on Lang'ata road which was sealed off.

The pupils were taken to Lang'ata hospital.

Police officers grab one of the activists in the protest

Activists and pupils protesting against the grabbing of the Lang'ata primary school playground on Monday morning helped demolish the wall separating the school from Weston Hotel.