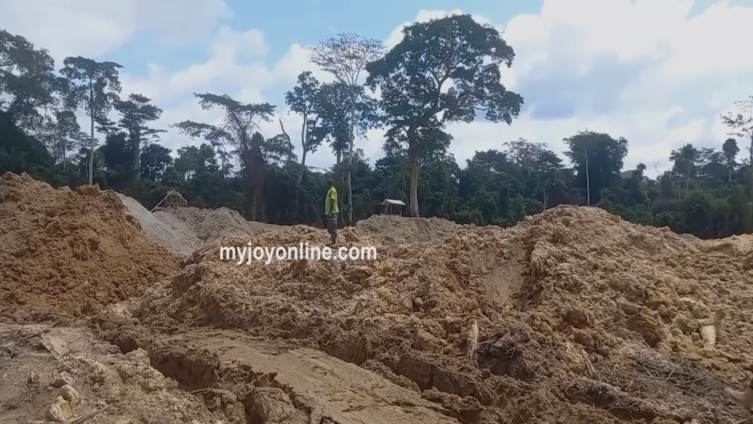 Illegal miners have invaded forest reserves in the Ashanti Region, despite the government’s ban on small-scale mining in forests and water bodies.

The Illegal miners have taken over the Apamprama and Odaw reserves with heavy earthmoving equipment, destroying several forest covers with impunity.

Officials of the Forestry Commission who visited the scene expressed shocked at the level of destruction.

“The situation is very horrible. And I think something must be done to it,” said the Ashanti Regional Manager of the Forestry Commission, Mr. Clement Omari.

The Oda reserve on the other hand measures 16,000 hectares.

Until the recent government’s ban on small-scale mining in river bodies and forest reserves, the two reserves were hotbeds for illegal mining operations.

Mining in those reserves appeared to have ceased completely and mined lands reclaimed.

But it appears it was short-lived.

Forestry Commission officials, led by Deputy Chief Executive, Martha Kwayie, and Ashanti Regional Manager, Clement Omari, were shocked to learn of the latest devastation caused to the reserves when they visited the scene last week.

That anti-galamsey operation saw the arrest of two Chinese nationals.

The Forestry Commission puts the current destruction in Oda Forest at about 20 hectares, similar to 1,600 standard football pitches.

Mr. Omari told JoyNews the level of destruction, especially in the Apamprama Forest reserve, is horrible.

“If you look at the extent of destruction, the only word I can use is that it is very horrible,” he said of the destruction.

“If you look at the way people have taken the law into their own hands, without entry permit, going into the forest reserve; a gazetted forest reserve and doing all these things which is not encouraging at all.”

For Mr. Omari, the only thing that can save the reserve is to drive away the illegal miners operating there.

“We need to sit up and ensure that all those recalcitrant operators are evicted from the place.”

According to Mr. Omari, the fight against illegal mining cannot be won overnight with the deployment of unarmed forest guards to face off with armed illegal miners.

He is calling for support from local assemblies, traditional authorities and politicians to back words with action to the fight against illegal mining.

“Forestry Commission, the politicians, land owners; district assemblies-all and sundry. We all need to sit up and ensure that the right thing is done.”

DISCLAIMER: The Views, Comments, Opinions, Contributions and Statements made by Readers and Contributors on this platform do not necessarily represent the views or policy of Multimedia Group Limited.
Tags:
Apamprama Forest Reserve
Forestry Commission
lIllegal miners
Oda Forest Reserve