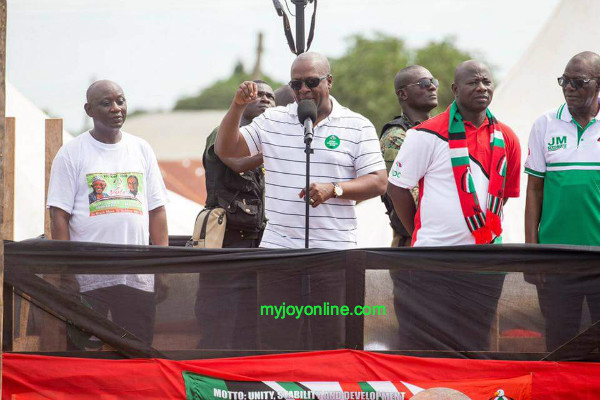 President John Mahama has commended former President John Agyekum Kufuor for his comment that four years is not enough for presidents to achieve their target.

Addressing voters as part of his campaign tour of the Northern Region, President Mahama said four years is simply not enough for any government to achieve their campaign promises.

Speaking in Twi language, he made a passionate appeal to voters in Kpandai, Bimbilla and Wulensi in the Northern Region to renew his mandate for four more years.

He has argued that in view of the global race for development, a Ghanaian president needs time to implement his programmes and also plan the economy.

President Mahama said four years is simply not enough for a president to finish all the work at transforming the nation, so the Constitution recommends four more years after the expiration of the first term. He said then the president steps down after the second term for another person to take over.

'Former President Kufour is a sensible person, very experienced president, not long ago he said the four years is not enough,' President Mahama said.

Ex-President Kufuor not long ago reiterated his call for an extension of the presidential term arguing, the four-year term is not enough to make a meaningful impact as president.

President Mahama said, for him, another term will help him build on the economic foundation his government has laid.

He told the electorates only a renewal of his mandate will bring about the social and economic transformation he has promised Ghanaians.

The President has also been speaking at swing constituency Yendi which for several years has been the scene of chieftaincy crisis since the murder of the late Ya-Na Yakubu Andani in 2001.