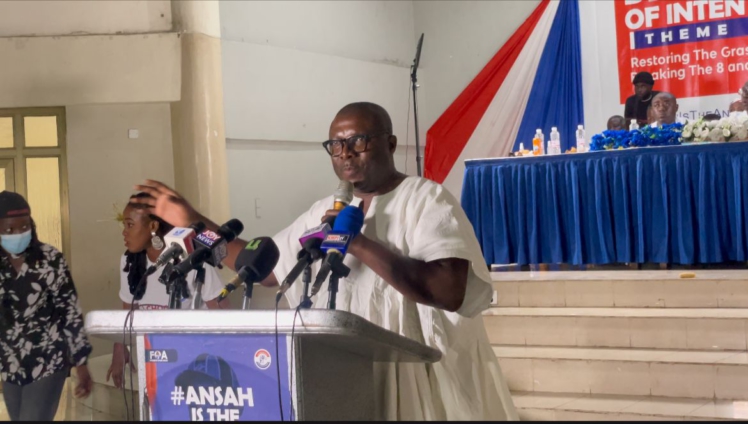 A former Member of Parliament for Suhum, Frederick Opare Ansah has declared his intention to contest as General Secretary for the governing NPP in its upcoming National Executive Elections.

The one-time Deputy Communication Minister who is poised for victory in the July polls, argues the dynamics of the 2024 elections require a different kind of leadership, mentality and approach to achieving the party’s quest to breaking the eight.

Speaking at an event organised by Friends of Opare Ansah at Takoradi in the Western Region on Saturday, March 26, 2022, he outlined his plans to help the party break the eight and make history.

According to him, if given the nod, he will restore the lost faith the grassroots have in the current leadership of the party and equip party officers to ensure absolute victory.

“The Party has always had the leadership required for the challenge it is confronted with and whereas the current leadership has done its best in the past, current and future challenges ahead require a different kind of leadership mentality and approach given the dynamics of contemporary intraparty and external political environment.”

“I stand for quality political leadership and the use of political democratic processes in the selection of such leaders. I believe the NPP as a party, and each of us as individual members has a duty to project politics and democratization as the process of choice for Ghana to select its leaders.

“The people of Ghana should have confidence that the political democratic process has a self-correcting mechanism and always yields to the will of the people,” he said.

“The need to bring back into our fold persons who have been part of this party but for one reason or another have decided to be apathetic cannot be downplayed in our quest to break the Eight! I will make it my personal business to tour the length and breadth of this country to unearth such people and bring them to join our fight. As I have always maintained, it is easier to convince an aggrieved NPP person to come back than to convince an NDC person to join our ranks and remain loyal to our cause!”

“My knowledge of parliamentary work will be brought to bear on the new relationship that will be forged with the parliamentary group to deepen the understanding of the work of MPs by party folk and to improve upon the sensitivity and response MPs give to their respective constituency parties. This will reduce the mistrust that usually develops among the various interest groups in the constituencies and hopefully lead to a lesser attrition rate for our caucus.”