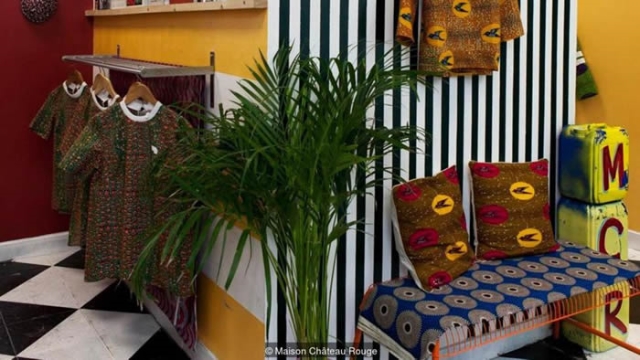 “What I really like is the feeling of being in a village,” said furniture designer Fabrice Daigremont. “Everyone knows each other. If you need advice or to borrow a tool, you can just pop into one of the other workshops and someone will be able to help.” Daigremont, who designs and makes high-end lamps, tables and stools alongside his work as an architect, is talking about the Goutte d’Or district of north Paris, where he has a showroom and workshop.”‹

It’s just a few minutes’ walk from the tourist-choked cobbles and souvenir shops of Montmartre, but could be a different world.

The Goutte d’Or is a burgeoning creative hub, with young jewellery and fashion designers setting up shop next to textile workshops, fashion and accessories boutiques, makers of leather goods and upmarket furniture, like Daigremont.

Fashion label Maison Château Rouge is another brand based in the area that has taken off, with its blend of African culture and contemporary cuts. The label has recently created a clothing and homeware line now being stocked in major French chain Monoprix.”‹

But design hub is just one of the Goutte d’Or’s identities: it’s also one of the last surviving traditional working-class neighbourhoods in the French capital, albeit one whose streets are fast gentrifying.

And it’s known as ‘Little Africa’ thanks to a decades-long wave of immigration from former French colonies that has lent the area a cosmopolitan vibe: tiny restaurants serve up chicken in peanut-based mafé sauce from Mali and spicy Senegalese fish stew, bissap (hibiscus) and plantain are on offer in the open-air market and fabric shops piled high with the traditional and colourful West African ‘wax’ fabrics, decorated with lively batik prints, brighten up the Parisian grey.

The textile skills that immigrants from Africa have brought to the Goutte d’Or are part of the reason this web of around 20 small streets – wedged between boulevard Barbès, rue Stephenson, rue Ordener and boulevard de la Chapelle – is now thriving as a creative hub, explains Christian Pechereau, coordinator of Les Gouttes D’Or de la Mode et du Design.”‹

This association was set up eight years ago to support, develop and communicate about the skills of a new generation of artisans, many of whom have taken inspiration from the area’s African aesthetic – and all of whom want to create something new, and attract new customers.

Helped by some public funding, it also aims to aid the transformation of a neighbourhood whose social and economic difficulties – from high levels of unemployment to drug dealing and other street crime – have led to an off-putting reputation for visitors.

“Our goal as an association is to pool our resources and communicate better about the skills and savoir-faire we have in the area, to bring it to a wider audience,” said Pechereau, speaking among the mannequins and patterned samples in the association’s showroom, on the cobbled rue des Gardes, where several new retail premises have helped attract creative businesses to the area, giving it a more welcoming vibe.

The Goutte d’Or is by no means the only neighbourhood to have seen the potential in local creativity. In Finland’s capital, which was World Design Capital in 2012, Design District Helsinki has been helping local creative businesses across the design spectrum to work together and attract tourists and locals alike to witness their design talents since 2005. It now has 220 members. “Helsinki has a strong design heritage and is using design to improve city life,” said Piia Lehtinen, president of the board of Design District Helsinki. “We support the city’s image as a design city.”

African wax fabrics are much in demand in the neighbourhood (Credit: Helen Massy-Beresford)

And in Cape Town, South Africa, the area around the Southern Guild gallery run by design duo Trevyn and Julian McGowan is emerging as a design focal point in the recently renovated V&A Waterfront area of the city.“We’re big believers in community and collaboration and a hub helps that,” said Trevyn McGowan. “Design destinations are good as they give the public a snapshot of the local industry and create a design-savvy and design-proud public, which is essential for the development of the industry.”

The Paris district is home to several homeware designers, including Fabrice Daigremont

Back in Paris, the Goutte d’Or association organises its own events and teams up with initiatives like Paris Design Week in order to attract visitors and to show what an often-overlooked part of Paris has to offer.

The association is thriving, with around 40 members benefitting from link-ups with museums, social media campaigns and open-workshop events, which are starting to get the message across.

It hasn’t been easy, however. “It’s starting to change – some people want to go off the beaten track – but often the people who pass by don’t have the spending power to visit these boutiques,” said Pechereau.

“The association aims to draw visitors here so they can see that our designers make objects that are original and much cheaper than elsewhere,” Pechereau added, giving the example of jewellery designer Dominique Petris who uses everything from razor-shell clams to leather, antique glass and paste paper in her designs, and has been based in the Goutte d’Or for 17 years.

Her creations sell more easily in a boutique in the chic 8th arrondissement of Paris, than in her own workshop in the rue des Gardes, Pechereau says. Two years ago members of the association formed a textile cooperative, which has allowed them to win high-profile contracts including making historically accurate period clothes for museums and costumes for operas.

The cooperative began with three members, now has nine, and has more than doubled its turnover in two years. There are plans to open a shared workshop space in 2018 to allow it to accept bigger contracts and grow further.

Saloum Fadel runs a textile workshop in the heart of the Goutte d’Or (Credit: Helen Massy-Beresford)

Saloum Fadel, who runs Fadel Couture, a textile workshop in the heart of the Goutte d’Or, also helps to manage the cooperative. Having successfully steered his own business towards high-end work such as making prototypes for designers including Agnès B, to weather a widespread downturn in the textile industry, Fadel sees the importance of highlighting local savoir-faire in order to aid economic growth.

Local artisans are benefitting from a renewed appreciation of the skills the Goutte d’Or has to offer, says Fadel, who is originally from Mauritania but has been in France for almost 28 years. “There’s now an undisputable value attached to the ‘Made in France’ label – businesses that moved production to China and Eastern Europe are coming back because the quality wasn’t there and customers are more and more conscious of the conditions their clothes are manufactured in.”

Fadel agrees with Daigremont that cooperation among neighbours is a big plus for the neighbourhood. “There are people here from so many different nationalities,” he said. “There’s a real sense of solidarity in the Goutte d’Or. That’s where the idea for the cooperative came from. There’s a richness in reaching out to other people, sharing and giving something back.”