Frank Mireku donates to NPP Abetifi Constituency after supporting 3 others 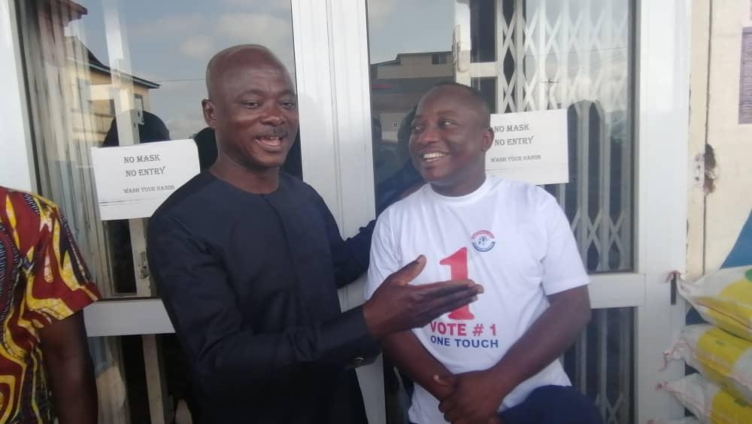 A local governance expert and member of the governing New Patriotic Party (NPP), Frank Mireku, has also supported the Abetifi Constituency ahead of the 2020 general election.

An amount of ¢5,000 cash and items were donated to the constituency and received by the party Chairman, Kweku Addo, at RockCity Hotel in the presence of MP for the area, Bryan Acheampong, and the District Chief Executive (DCE), Isaac Agyapong.

A few weeks ago, Mr Mireku, a disqualified aspirant during the NPP Primaries at Abirem Constituency presented items worth ¢15, 000 and ¢10, 000 cash to the Parliamentary Candidates for Nkawkaw and Abirem – Joseph Frempong and John Osei Frimpong respectively – to help push their agenda for victory 2020.

Earlier, an amount of ¢10,000 cash and a vehicle were also donated to the Mpraeso Constituency.

The items donated to Nkawkaw and Abirem include bags of rice, gallons of oil, face masks, bottles, and sachets of water.

The beneficiary constituencies and others in Kwahu have vowed to maximize votes for the NPP, a dream Frank Mireku has decided to support for victory in the December 7 polls.

Receiving the items at Nkawkaw, the NPP parliamentary candidate, Joseph Frempong and his executives including the constituency chairman, Kwame Osei Dankwah and others expressed their profound gratitude for his kind gesture.

They were optimistic such a donation will go a long way to help the party secure a profound victory in the constituency and beyond.

On his part, the parliamentary candidate and the incumbent MP for Abirem constituency, John Osei Frimpong told journalists, “We are impressed with his support to the party just after the primaries.

“We’ve heard about his contributions made to some other constituencies and today he is here to donate to us all. This is really beautiful and I must say this will go into the party’s record because he has served for long”.

“We’ll asked the party to acknowledge you by keeping all these records for the future,” he said.

On behalf of the party leadership at Abirem Constituency, John Osei Frimpong thanked him for the support and wished him well in all his endeavors.

Mr Frank Mireku was aspiring to become the parliamentary candidate for Abirem Constituency but was disqualified based on certain principles, however, he was later cleared by the National Appeals Committee of no wrongdoing.

In a brief address after the donation at Akoase in the Birem North District, he expressed his commitment to work tirelessly for the party’s victory.

He also added that, President Akufo Addo deserves another term to do more with his the support of majority NPP legislators on his side in Parliament.

DISCLAIMER: The Views, Comments, Opinions, Contributions and Statements made by Readers and Contributors on this platform do not necessarily represent the views or policy of Multimedia Group Limited.
Tags:
Abetifi
Akufo Addo
Election 2020
Frank Mireku
Kwahu
NPP