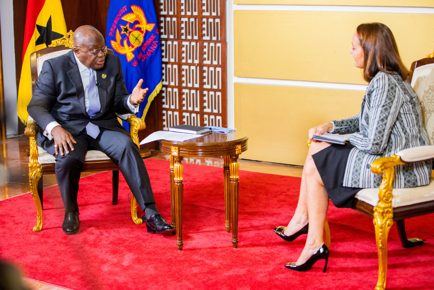 He has therefore outlined the need for Ghanaian jobseekers to acquaint themselves with the French language as the country’s potential in export and trade grows.

He made this assertion during an exclusive interview with the French Ambassador to Ghana, Anne Sophie Avé for the last episode of Season 1 of her Touch of France TV talk show.

Prez Akufo-Addo noted that the French language plays an important role in commerce in AfCFTA.

Following its launch on January 1, 2021, the AfCFTA pact aims to create the largest free trade area in the world, connecting 1.3 billion people across 55 countries with a combined Gross Domestic Product (GDP) valued at $3.4 trillion. It is also expected to reduce the trade tariffs and enable Africa to integrate further into the global supply chains.

With Ghana being “an English-speaking Island in a French sea” as he put it during the encounter, the French Ambassador believes that jobseekers should prepare to meet the demand that will come with the country’s growing export potential.

“I can see that coming very easily. In any event, the greater the links, the stronger the integration and you are talking about links of language, of culture, of blood. All these are important links that enable people to live in the same space”, he explained.

On the Touch of France TV show, President Akufo-Addo discussed numerous subjects pertaining to working and doing business in France and applying the acquired knowledge in Ghana and Africa. He is the first Ghanaian head of state to have been interviewed by an ambassador.

DISCLAIMER: The Views, Comments, Opinions, Contributions and Statements made by Readers and Contributors on this platform do not necessarily represent the views or policy of Multimedia Group Limited.
Tags:
AfCFTA
Anne Sophie Avé
President Akufo-Addo