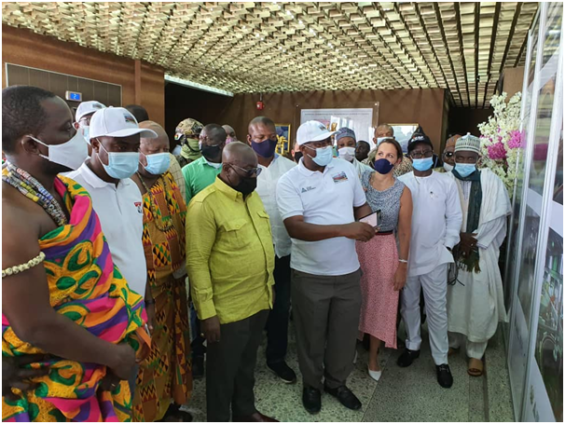 Inside the control room of the newly refurbished Kpong Hydroelectric Dam, engineers click on buttons on a computer screen to regulate the spillway gates of the dam.

This is a departure from the situation years back when controls were done manually.

The 160 MW Kpong Dam, located 32km downstream of Akosombo Dam on River Volta, in the town of Akuse in the Eastern Region, is one of two hydroelectric power dams generating Ghana’s national electricity.

Built-in 1982 by the Volta River Authority (VRA), the dam supplements power production from the 1020 MW Akosombo Dam, for the smelting of aluminum at VALCO in Tema and the provision of clean energy to customers connected to the Ghana power grid.

Since commissioning of the plant, the station operated reliably until early 2000 when the power generating components started experiencing high failure rate.

In addition, spare parts for repair works were difficult to acquire because most of the equipment were obsolete and original equipment support was nonexistent.

After a technical audit, Agence Française de Development (AFD), a public financial institution that implements development policies of the French government worldwide, provided a loan of €50 million to VRA to implement the Kpong Generating Station retrofit.

The contractor, Andritz Hydro, mobilized to site in 2014. He is in the final stages of commissioning the last unit and finalizing the retrofit works.

Johnson Hlordjie, Plant Manager for the Kpong Generating Station, feels excited about the prospects of producing reliable power using modern technology and said: “We’re now using state-of-the-art technology, reliability has improved and for the next 30 years, we can operate at the maximum level and produce reliably to feed the national grid”.

The retrofit works covered the replacement of turbine components and generator parts. It also involved the conversion of manual to automatic controls.

A new station battery system for the plant has been installed together with the new SCADA system in the control room.

Joshua Laryea Adjei, Resident Manager, Hatch Limited, Canada, consultants for the project, explained further how the retrofit has made the plant a better energy-producer during a recent tour of the facility.

“In this station, we have 15 spillway gates and all the old electrical equipment has been replaced.

Furthermore, the gates were automated so that the operators can run the gates from the control room remotely while ensuring that the communication to the gate is embedded in to the new automation system.

“The major benefit is theextension of the life of the plantfor another 25 to 30 years. We have modern, upgraded and state-of-the-art equipment.

“So basically, we can do things easier, reduce cost in terms of maintenance, since we have a more reliable and efficient plant,” he added.

Not only does this project ensure reliable power production, it has also brought employment to the community.

Mary Kpogli is one of the beneficiaries of this project. She secured a job as a welder at the plant during the start of the project in 2014 and says: “I’m here because of the job. I am a welder. This work has really helped me to raise some money to fend for my family”.

Ing. Ken Arthur, Project Director of the Kpong Generating Station Retrofit Project says: “The project has been of immense benefit to the environment and VRA is into responsible operation in terms of environmental issues regarding the communities that are impacted by our operations.

“So, of course, this main project included work on the spillway gates etc. So, altogether, I’m sure the community would still continue to benefit from our responsible operation to support their livelihood.”

With the retrofit complete, power consumers can expect improved and reliable supply whilst operators of the dam will be able to diagnoseproblems in time and cut down onforced outages.

President Nana Akufo-Addo commissioned this Generating Station, which was successfully refurbished, in the presence of H. E. Anne-Sophie Avé, the Ambassador of France to Ghana, on 26 October 2020.

“I thank the French Government for the support provided to Ghana for this project, a reaffirmation of the excellent relations between us”, the President said.

DISCLAIMER: The Views, Comments, Opinions, Contributions and Statements made by Readers and Contributors on this platform do not necessarily represent the views or policy of Multimedia Group Limited.
Tags:
Kpong Dam