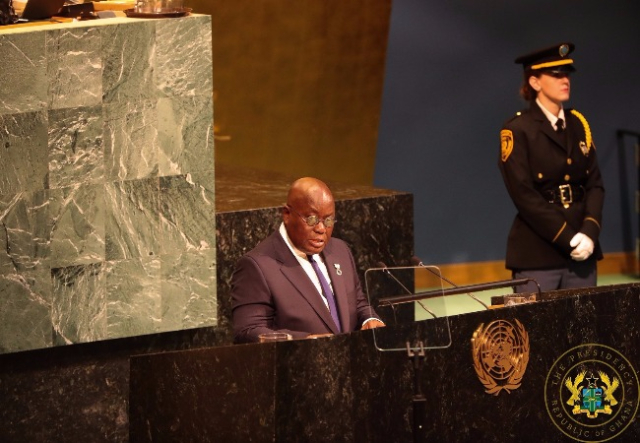 President Nana Akufo-Addo says his government is working to grow Ghana’s economy and, thereby, open up opportunities for the progress and prosperity of all Ghanaians.

Acknowledging that Ghana is nowhere near where she has to be, his administration is determined to realise fully the country’s potential and make Ghana a prosperous nation.

Speaking the 72nd session of the United Nations' General Assembly meeting, he said "we want to build a Ghana beyond aid. It is an easier platform on which to build sustainable relationships.

"In talking about sustainable relations, Africa, and, indeed, Ghana, remains committed to remaining a nuclear-weapon-free continent. Three weeks ago, highly-enriched uranium was flown out of Ghana back to China, signalling the end of the removal of all such material from the country."

President Akufo-Addo also called for reforms at the UN saying it is "nothing new when I draw attention to the urgent need to reform this Organisation."

"It has been talked about and scheduled for a long time, but, somehow, we have never found the courage and the will to reform the United Nations. Ghana supports the process of UN Reform, especially of the UN Security Council, as set out in Africa’s Common Position on UN Reform, based on the Ezulwini Consensus. The time is long overdue to correct the longstanding injustice that the current structure and composition of the UN Security Council represent for the nations of Africa," he said.

Below is his speech

It has been sixty years since my country, Ghana, became a member of this Organisation. We joined at our independence some twelve years after the first meeting of the Organisation in San Francisco, and Ghana has been an active participant in the United Nations since then.

I want, Mr President, to thank the United Nations for the honour done Ghana by my appointment, by the Secretary General, as co-Chair of the Group of Advocates of Eminent Persons of the UN Sustainable Development Goals, to continue in the position that was held by my predecessor as President, His Excellency John Dramani Mahama. This mark of trust in Ghana’s leaders is a matter of justifiable pride for the Ghanaian people, a trust I pledge to uphold.

On 25th September, 2015, when the SDGs were adopted, there were sceptics who feared that the goals were too many and too complex to be successfully tackled, even with concerted effort.

The lesson that we have learnt, however, from the experience of this Organisation is that, once the world puts its collective mind to something, the chances are we would get it right.

And, every day, something happens to bring home to us, the inhabitants of this planet, that we are in it together. There is no better dramatic indication of this truth than the images that have recently dominated our television screens of devastation caused by floods in Houston Texas, in Dhaka Bangladesh, in Mumbai India, in Palpa Nepal, in Dominica, Puerto Rico, Antigua and Barbuda, and St. Martin, all in the Caribbean, and in Niamey Niger.

One of the most modern cities in the richest, most powerful nation on our earth, was suffering the same fate as Niamey in the Sahel region of Africa, one of the poorest parts of the world. At the height of the raging waters, one thing has become clear: it does not matter if you are in the richest or poorest part of the world, the awesome power of nature was on display, and we, humans, came across as the same sad creatures at the mercy of nature.

As I watched and listened, along with the rest of the world, it occurred to me that, all put together, the SDGs are, indeed, a worthwhile set of goals for the world. They bear repeating: no poverty, zero hunger, good health and well-being, quality education, clean water and sanitation, decent work and economic growth, industry, innovation and infrastructure, reduced inequalities, sustainable cities and communities, responsible consumption and production, life below water, life on land, peace, justice and strong institutions and topped up with partnerships for the goals. We should work hard to achieve these goals. The world will be a much better place.

Ghana was the first country in sub-Saharan Africa to gain her freedom from colonial rule. This year marks the 60th anniversary of that independence, and it is auspicious that I am addressing this Assembly for the first time on the birth date of our historic first President, Kwame Nkrumah, a day we have set aside to commemorate him.

We are not under any illusions about the hard work that it will take to achieve our stated goals, but we are not afraid of hard work. We know that a critical ingredient in making sustainable economic progress is to ensure a stable democratic system of governance.

I believe we are making this progress in Ghana. After years of political turmoil and the accompanying economic chaos, a consensus has emerged in our Fourth Republic. We have had political stability for the last 25 years under a multi-party democracy, where regular elections are now an accepted feature of our governance.

I am here, today, because of elections last December in which the people of Ghana voted out an incumbent government, and gave me and my party the mandate and honour to govern our nation for the next four years. We continue to be a beacon of democracy and stability on the continent, our institutions of state are growing stronger, and we have made more progress with our economy than at any time since independence.

Mr President, we are nowhere near where we want to be, but we are determined to realise our potential and make Ghana a prosperous nation.

There will always be adventurers amongst us Ghanaians who would want to seek challenges in different parts of the world, and we would wish them well and expect that wherever they go, they would be welcome and treated with dignity.

But we are working to grow our economy and open up opportunities for all our citizens. No longer should Ghanaians feel they have to subject themselves to the intolerable and inhumane conditions of crossing the Sahara, and drowning in the Mediterranean, in the hope of making a living in Europe.

We have just started the Free Senior High School programme, which aims to guarantee secondary education for all of Ghana’s children. The programme will ensure that all our children will be educated to at least secondary level, and money, or the lack of it, will no longer mean a denial of education. This has already led to an increase of over 90,000 children, who have entered secondary school this academic year, who would otherwise have dropped out at this stage. SDG 4, which aims at ensuring inclusive and equitable quality education and promoting lifelong learning opportunities for all, will be within our reach by the target date.

We do not want to be a scar on anybody’s conscience. We want to build an economy that is not dependent on charity and handouts. Long and bitter experience has taught us no matter how generous the charity, we would remain poor.

We want to build a Ghana which looks to the use of its own resources and their proper management as the way to engineer social and economic growth in our country. We want to build an economy that looks past commodities to position our country in the global marketplace.

We are not disclaiming aid, but we do want to discard a mindset of dependency and living on handouts; we want to build a Ghana beyond aid. It is an easier platform on which to build sustainable relationships.

In talking about sustainable relations, Africa, and, indeed, Ghana, remains committed to remaining a nuclear-weapon-free continent. Three weeks ago, highly-enriched uranium was flown out of Ghana back to China, signalling the end of the removal of all such material from the country. Our nuclear reactor has, subsequently, been converted to use low-enriched fuel for power generation. A world, free of nuclear weapons, must be in all our collective interest.

Mr. President, I wish to reaffirm my country’s commitment to maintaining friendly and cordial relations with all the countries and peoples of the world. The full engagement of Ghana, through the Economic Community of West African States (ECOWAS), in the process of West African integration, and through the African Union (AU), in the process of African integration, remains a goal of my government.

Regional and continental integration are in Ghana’s interest, as they represent one of the surest ways towards establishing the conditions for prosperity in our region and on the continent in the decades ahead, as well as helping to ensure peace and security and combating the scourges of terrorism, extremism and intolerance. The conflicts that continue to plague our continent in Libya, South Sudan, Congo DRC, and Mali, would be more effectively resolved if the international community was to support, not undermine, the efforts of our regional and continental organisations to deal with them.

Ghana will also continue to be active in the multilateral organisations to which we belong, such as La Francophonie, the Commonwealth of Nations, and this United Nations, because we believe multilateral action and international co-operation are in the interest of all of us.

We want to build a Ghana that will enable our people deal with the rest of the world on an equal basis. I say nothing new, when I draw attention to the urgent need to reform this Organisation.

It has been talked about and scheduled for a long time, but, somehow, we have never found the courage and the will to reform the United Nations. Ghana supports the process of UN Reform, especially of the UN Security Council, as set out in Africa’s Common Position on UN Reform, based on the Ezulwini Consensus. The time is long overdue to correct the longstanding injustice that the current structure and composition of the UN Security Council represent for the nations of Africa.

We cannot continue to preach democracy and fairness around the world, we cannot insist on peace and justice around the world, when our global organisation is not seen by the majority of its members as having a structure that is just and fair. It is, indeed, seen by many as helping to perpetuate an unfair world order.

This Organisation provides the best vehicle for the world to manage its many varied problems, and we would undermine its credibility and fail in our duty if we do not reform the United Nations. We dare not let ourselves and future generations down. The time for reform has come.

I thank you very much for your attention.