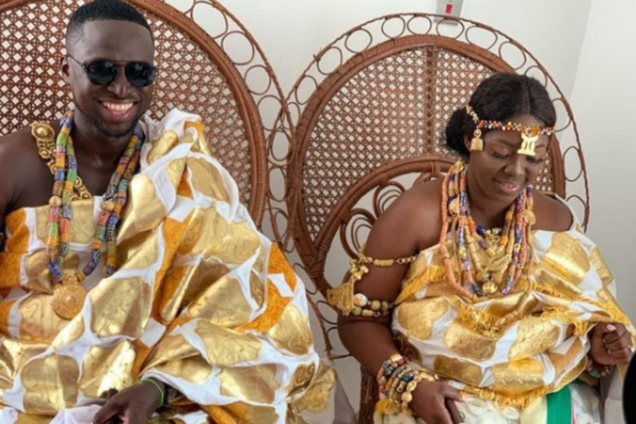 The ex-wife of comedian Funny Face, Elizabeth Ntim, had remarried.

The police officer got married in a traditional ceremony held at Weija, in the Greater Accra Region, on July 28.

The couple were seen in viral videos dressed in Kente with matching jewellery.

Dressed in regal outfits, the couple exchanged vows and rings.

They later changed into different outfits, with Mr Adjei wearing a Kaftan while Mrs Adjei wore a kneel length dress matching her husband’s outfit for the reception.

The marriage comes exactly five years after she ended her relationship with Funny Face, whose government name is Benson Nana Yaw Oduro.

Funny Face and Adwoa broke up in 2016 after two years of marriage in what turned out to be a very controversial divorce.

Although Funny Face did not explain what happened, he wrote in a Facebook post that he tried his best.

However, in numerous interviews, the two threw jabs at each other, with Funny Face tagging the marriage as useless and Nana Adjoa calling him a two-minute man.

In February 2020, Funny Face took to social media to apologise to his ex-wife Elizabeth Nana Adjoa Ntim and forgive her for everything she said during their quarrel.

The ‘Kasoa Trotro’ producer, in his post, revealed that since their separation, he had held on to hatred and anger.

“From today Nana, I FORGIVE YOU…everything you said about me during our fight .. everything I said about you too .. please FORGIVE ME .. let’s live peacefully on this earth for the world we see today is passing away soo quickly,” he wrote.

DISCLAIMER: The Views, Comments, Opinions, Contributions and Statements made by Readers and Contributors on this platform do not necessarily represent the views or policy of Multimedia Group Limited.
Tags:
Elizabeth Ntim
Funny face
Marriage
Traditional Wedding