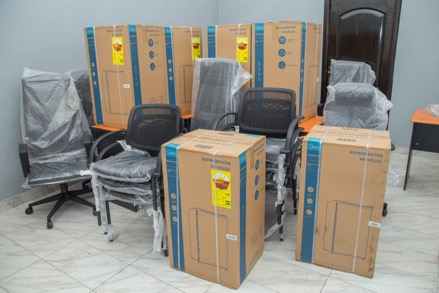 This forms part of GCNet’s commitment to support the GRA and Government of Ghana to increase the country’s revenue generation for accelerated economic development.

The laptops will facilitate operations of field officers of the Domestic Tax Revenue Division (DTRD) of the GRA to boost domestic revenue collection.

Presenting the items to GRA through the Ministry of Finance, Executive Chairman of GCNet, Dr. Nortey Omaboe, expressed confidence that the laptops would help officers of DTRD to use the trips TM system that GCNet has deployed, while on the go.

He assured that GCNet would continue to offer logistic support to GRA in line with its commitment to contribute to resourcing field support officers to use the Total Revenue Integrated Processing Systems (trips TM) in building an efficient tax administration regime.

Kweku Kwarteng, Deputy Minister of Finance in charge of Revenue who received the laptops on behalf of GRA, expressed his excitement at GCNet’s gesture noting that it would assist greatly to achieve the targets of the DTRD.

“While DTRD officers have desktop computers installed for them at various tax offices, the flexibility to undertake field operations is constrained by the limited number of laptops presently available to them. This situation, for instance, constrains their capacity to undertake tax audits on the premises of the taxpayer efficiently” observed Mr. Kwarteng.

Kweku Kwarteng, Deputy Finance Minister in a meeting with the GCNet leadership after the presentation

All 69 GRA tax offices of the DTRD are hooked on to the trips TM system. In 2018, the DTRD exceeded its revenue target, with public sensitization, infrastructure support from GCNet and diligence from the GRA Staff.

In another development, GCNet has extended logistic support to the Accra (Jamestown) Collection Office of the Customs Division of the GRA with items valued at over $13,000.00.

The items included air-conditioners, office desks, tabletop fridges and office chairs among others.

Sector Commander for the Accra Collection Office, Emmanuel Ohene, commended GCNet for the gesture and noted that the logistic support would go a long way to enhance revenue collection efforts by the James Town office.

GCNet has also undertaken a massive refurbishment of the office in early 2016 at a cost of over ¢300,000.