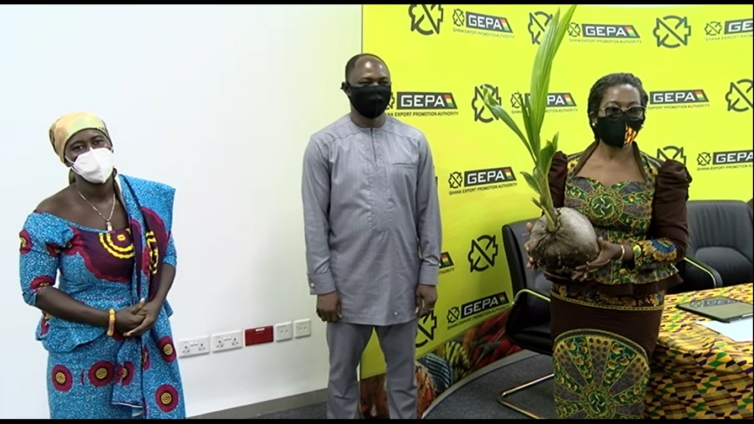 The symbolic handing over event took place at the African Trade House with the CEO of Ghana Export Promotion Authority, Dr Afua Asabea Asare, the management team of GEPA and Executives of COFAG.

“Pre-Covid19, it was estimated that the global coconut market value will be valued at over $15 billion by the year 2024 and with the impending Africa Continental Free Trade Area, we expect that opportunities will open up for Ghana to export more horticultural products to other African countries.

“Thus our various agricultural value chains need to be innovative &amp; competitive to take advantage of market opportunities that will be available post-Covid 19. From our end, Ghana Export Promotion Authority remains committed in its support of the coconut sector, as we continue to strategically intervene once again by providing 160,000 quality disease-resistant seedlings to farmer groups,” Dr Afua Asabea Asare stated.

Since 2017, GEPA began an intervention to boost the production of coconut in terms of market demand with the vision to increase acreage nationwide by 10,000 acres by the end of these interventions.

Western and Central regions were the first beneficiaries of this intervention of getting 100,000 coconut seedlings in total.

This second handing over of coconut seedlings forms part of GEPA’S interventions to help augment the export of coconut and its derivatives in the next three to five years.

This is in line with the Authority’s mandate of facilitating, developing and promoting Non-Traditional Exports to shore up Ghana’s foreign exchange reserves.

Receiving the seedlings on behalf of the coconut farmers, President of the Association, Patrick Ndabiah acknowledged GEPA’s support stating; “We welcome the recognition and tremendous interest of GEPA in helping us achieve the vision of positioning coconut as a non-traditional export with the potential of raking in $2 billion by 2023 by increasing the production volumes through the provision of seedlings to farmers.”

Beneficiaries for the intervention will be farmers in the Volta, Ashanti, Western North, Central, Oti, Eastern and Western regions. COFAG is expected to ensure the success of the intervention by monitoring and using best practices in the cultivation of the seedlings distributed.

GEPA has been a major source of support to Ghana’s coconut sector as it partnered the African Coconut Group to organize the first International Coconut Festival at the Accra International Conference Center in 2019, an event which provided large scale international exposure for various players in the coconut value chain.