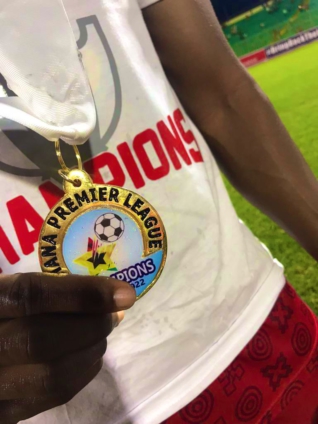 The Ghana Football Association’s (GFA) policy of supporting local industry has been touted as the rationale behind the Ghana Premier League winners’ medals being contracted to a local blacksmith, the association has revealed.

The nature of the medal, though an improvement from last season, has been questioned with fans displaying their dissatisfaction with the accolade.

Despite the promise of the GFA to improve on it by entrusting it to a local manufacturer, the final work done by the artisans has been far from achieving its target.

However, GFA General Secretary Prosper Harrison Addo claims that the medals were made by local craftsmen because the FA wished to demonstrate support for the local sector.

“These are handcrafted medals made in Ghana. People need to get hold of one of the medals and have a good feel of it to know the quality it’s made of and appreciate the handiwork of the Ghanaian visual art students.

“Any other medal you see that people are touting on social media; we’ve called all the people and they cannot make them here. They are all imported. All the university ones that you see are all imported from China.

“The policy of the GFA this year is to support local industry. We cannot pay lip service to supporting local industry and be importing everything from outside the country,” he said as quoted by Citi Sports.

Kotoko were crowned champions of the top flight at the Baba Yara Stadium on Sunday, June 12.