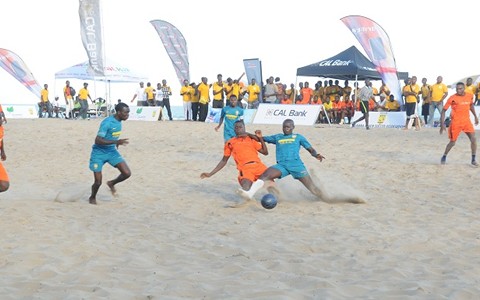 Back from a long break necessitated by the 2014 FIFA World Cup Finals in Brazil, Africa's Premier and Division One Beach Soccer leagues have resumed at the La Beach Soccer Arena in the Ghanaian capital Accra.
The 8 weeks lull was expected to turn things around for a number of teams and defending champions Sunset made most of their preparations with a comfortable 3-0 victory over glamour club East Legon Sharks.
The Volta boys played a tactically superior game by scoring a goal in each of the three sessions of the game to seal their three points.
La-Yoca versus Dansoman was a fiercely contested Accra derby with the DC team holding their nerves when it mattered most to claim the three points. La Yoca scored first through Abdallah Michael before being pegged back with two quick goals from Dansoman. The La based club wrestled back the advantage, taking a 3-2 lead into the final quarter of the game to set up a nerve wracking finish. Dansoman were to have the last laugh thanks to hero Mathew Lamptey who popped up with two perfectly crafted goals to hand Dansoman the three points as it ended 4-3 at the death.
Newly promoted Nima BSC continue their resurgence after a shaky baptism of fire at the start of the season.
In a six-goal thriller, they matched Teshie United stride for stride picking up their first point in the top flight of the Ghana beach soccer league. A spirited display with a brace from Adapesah Sampson and a goal from Alhassan Sadat rescued a point for them against the slick Teshie team who dominated for greater parts of the game.
The current league leaders from Keta maintained their good run without kicking a ball at the La Beach Soccer Arena.
Havedzi Mighty Warriors were pumped up and ready for opponents Ada Assurance but the latter failed to turn up.
A potential suspension looms for Ada whose CEO ironically sat and watched the other games from the sides.
In another interesting development, two time goal king, Richard Osa finally broke his 6 week scoring drought with a brace to aid his Wuo Gbee side dispatch Gulf powers 4-3.
In the big game of Division One, African Angels conjured a huge upset, by defeating leaders Golden Eagles 5-4.
The end to end action and three precious points for the Angels has thrown the race for promotion in that division wide open.
Tags: