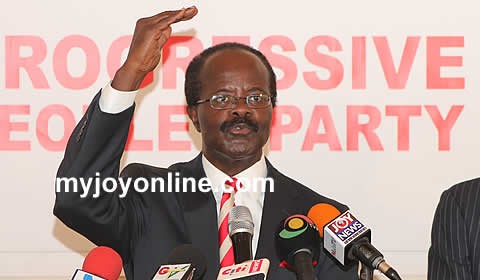 Ghana loses one billion dollars annually due to corrupt practices in the public sector, Dr Papa Kwesi Nduom, the 2012 Presidential Candidate of the Progressive People’s Party (PPP), said at the weekend.

He said a PPP government would tackle especially institutional corruption in a more proactive and responsive manner that would stimulate or inspire the ordinary citizen to contribute significantly in the fight against the menace.

Addressing branch executives of the party in the Brong-Ahafo Region at a meeting in Techiman, Dr Nduom said certain provisions in the 1992 Constitution did not encourage the fight against corruption and would be amended under the PPP administration.

He cited for instance that power would be vested in the electorate to elect people into metropolitan, municipal and district chief executive positions to make them more responsive and accountable.

Dr Nduom noted with regret that both the New Patriotic Party (NPP) and the National Democratic Congress (NDC) had failed the country in the national reconstruction process, and that if Ghanaians relied and put their confidence in those parties, they would continue to wallow in abject poverty.

He observed that the NPP and NDC were filled with selfish individuals who sought their partisan and parochial interests at the expense of the nation.

Dr Nduom said that was why he was challenging Ghanaian voters to give the PPP a chance in Election 2016 to solve the unemployment problem, power crisis and the economic downturn to bring remarkable improvement in the living conditions of the peole.

He said the party was worried about the poor conditions of service of the Ghanaian worker and the high level of poverty and advised the youth to avoid idleness and start something small.