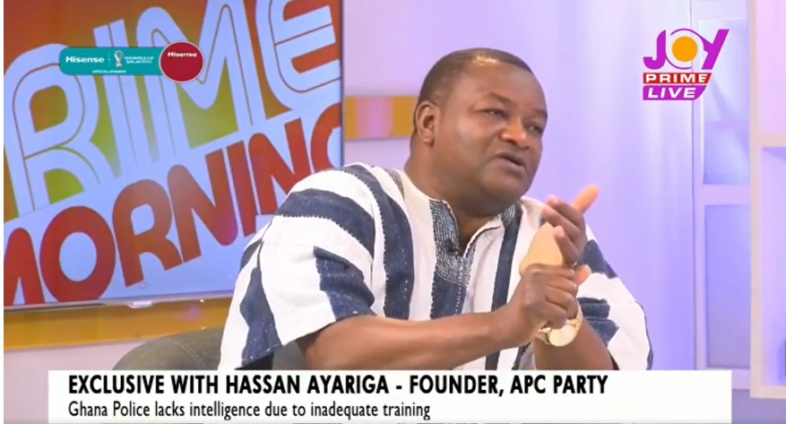 The founder and leader of the All People’s Congress (APC), Dr. Hassan Ayariga, says the Ghana Police Service lacks intelligence due to inadequate training.

Speaking to Roselyn Felli on Prime Morning Monday, he stated that security personnel require intelligence to be able to control crime. He believes the lack of intelligence is a major cause of corruption in the country.

He said, “When they have this kind of training, there won’t be corruption.”

He also indicated that patriotism is a complementary factor to the training process, which the majority of the security personnel lack.

According to Dr. Hassan Ayariga, the police are not to be blamed for the kind of attitude they exhibit, saying most people venture into the service for monetary gains.

“The kind of training that we need from our policemen, they do not have it. It’s not their fault. Sometimes it’s a job for the men. Look at national security, they’ve been taken over by party boys,” he added.

He said most policemen hide their identity due to lack of intelligence and for fear of being mocked.

However, the APC 2024 flagbearer hopeful has promised to provide additional and adequate training for all security personnel when elected as president.

“There will be a standard of training for all policemen. The least of a policeman in Ghana will be a first degree holder because when you meet a policeman in Germany and he talks to you, you’ll know he’s an intelligent officer,” he assured.

He stipulated that all corrupt politicians would be imprisoned during his tenure as President, believing that they are a contributory factor to Ghana’s increasing rate of corruption.

Speaking on the show, Dr. Hassan Ayariga indicated that he needs one term of governance to restructure the country and stop corruption totally.