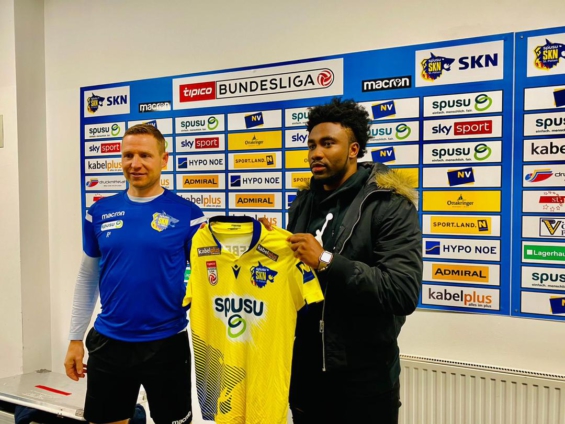 Ghana striker Samuel Tetteh has joined Austrian top-flight side St. Polten on loan from Red Bull Salzburg until the rest of the season.

Tetteh returned to Salzburg last month after a loan spell in the Major League Soccer (MLS) with New York Red Bulls. But, Salzburg has loaned him out for the second time in less than a year.

St Polten announced the arrival of Tetteh on Tuesday after he passed his medical and signed contract.

The 24-year-old will wear number 99 shirt at Polten.

“We wanted to be even more unpredictable for the upcoming tasks on the offensive. With Samuel, we have now found a player who, with his technique and speed, brings the attributes we were looking for.

In addition, he has already proven his skills in the league several times. Therefore we are happy that we can welcome him to our ranks until the end of the season,” St Polten sports director Georg Zellhofer told the club’s website.

Tetteh’s contract with Salzburg will expire on June 30, 2022.

He has been capped eight times by Ghana and scored a goal since his debut in 2015.

DISCLAIMER: The Views, Comments, Opinions, Contributions and Statements made by Readers and Contributors on this platform do not necessarily represent the views or policy of Multimedia Group Limited.
Tags:
Red Bull Salzburg
Samuel Tetteh
St. polten