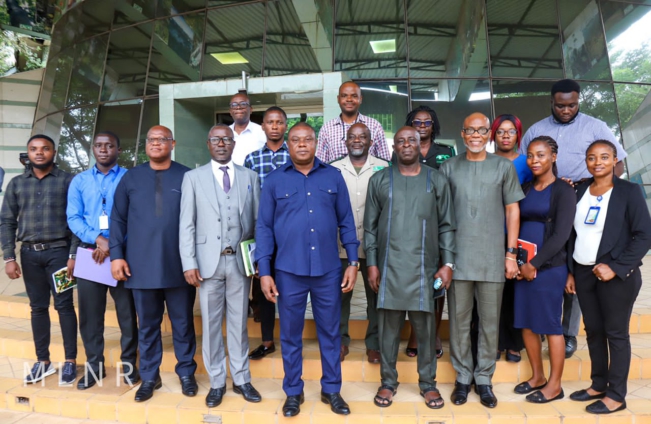 The Chief Executive Officer (CEO) of the Forestry Commission, John Allotey has disclosed that Ghana will be the first African country to host the World’s Teak Conference from the 5th to 8th of September, 2022.

The CEO announced this during his  presentation to a high powered delegation from the Forestry Commission in Edo State, Nigeria that paid a courtesy call on him on Monday, 15th August, 2022.

He noted that it is befitting of Ghana to be the first African country to host such an important event because “aside the Asian countries, no other country produces more teak than Ghana and it has taken a deliberate effort to get us to this level.”

Mr. Allotey extended an arm of invite to the team from Edo State to join, learn and contribute to the conference, explaining that the Conference will bring together stakeholders, traders of Teak, researchers and all who matter in the Forestry sector to deliberate on ideas on how to grow a vibrant business in that venture.

He told the Nigerian delegation that Ghana’s strategy is to plant more teaks and other indigenous species in degraded areas to shot up the numbers as teak forms a large chuck of the country’s export in terms of timber.

Still on trees and their importance, he hoped that the two countries will find legal ways to export Rosewood from sustainable sources, adding that Ghana is still enforcing it’s ban on the commodity until better mechanism are adopted.

Mr. John Allotey alluded that one key area that has also received global attention is Climate Change and called for a collective and collaborative effort to change the world reports and achieve the goals set to reduce global warming.

He also mentioned trade as an important subject that needs to be considered in the collaboration agenda, notifying that a good exchange of expertise of both countries will help improve the trade sector.

The Acting Chairman of Edo State Forestry Commission, Mr. Edward Obiaw expressed his gratitude to the Chief Executive and the Commission for the positive response and warm reception.

Mr. Obiaw highlighted some achievements and challenges being faced by the Edo State Commission as they transition from a department into a Commission.

He explained that one of the major challenges is the bureaucratic nature of their administration but promised to work together with his youthful team to change the status quo.

He also made mention of over reserving of forest lands in the country which he noted  has led to encroachment by the citizens who are mostly farmers, adding over exploitation of timber, security challenges and institutional weakness as others

The Chairman applauded the work the Commission has done in Ghana and assured that “Forestry Commission in Edo will be built around the model in Ghana and we are taking all the experience from you.”

Mr. Joseph Osiakwan, the Technical Director for Forestry who joined other officers of the Commission and CEO to receive the delegation from Nigeria, also congratulated the Chairman of Edo State Forestry Commission and submitted to the team to consider planning excellent Forestry frameworks and Forestry wildlife polices which will guide their operations and ensure that they do not repeat the mistakes of the mother institutions.

DISCLAIMER: The Views, Comments, Opinions, Contributions and Statements made by Readers and Contributors on this platform do not necessarily represent the views or policy of Multimedia Group Limited.
Tags:
Forestry Commission
World Teak Conference